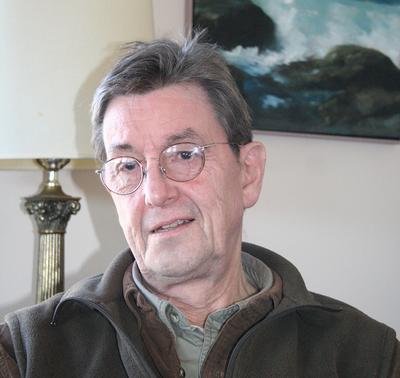 The Rev. Rob McCall of the First Congregational Church of Blue Hill, Maine announced he is leaving in September.

The Rev. Rob McCall, pastor for the Blue Hill Congregational Church for nearly 28 years, announced he will be leaving in September.

He would like to see someone younger take his place, he said in a recent interview.

“I just turned 70…Let the church bring someone young [with a] more contemporary education,” he said.

McCall graduated from the Harvard Divinity School in 1970, with a “good foundation in theology and tradition,” he said. “I think I was at the twilight of the classical seminary education.”

The First Congregational Church of Blue Hill is doing “well in every way,” he said, in attendance and financially.

Sunday service brings in anywhere from 70 to over 100 worshippers, and there are 275 members on the books.

“Younger people are coming in,” he said, with a different view of what they expect from a church. “They’re not nearly so concerned with doctrine.”

Instead, younger members are interested in social activism and feel bound to a church without regularly attending services.

“I don’t think that hurts the church,” he added.

McCall’s future plans include moving to Eastport, in Washington County, where his family had a camp since 1976. He said he and his wife bought a house there in 1998 and “we’ve been working along on it.”

He is not retiring from the ministry, and still plans to write his columns for The Weekly Packet and Quoddy Tides of Eastport and to continue his WERU radio show.