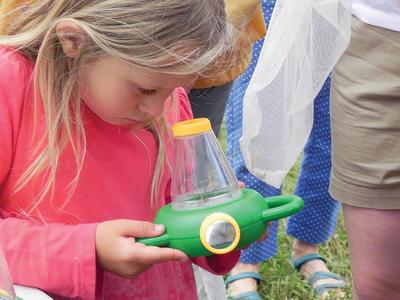 Did you know that crickets have ears on the sides of their bodies? Or that daddy longlegs aren’t true spiders because they have only one body part?

Sixteen learners of all ages studied more than a dozen types of bugs and butterflies “on the fly,” so to speak, at a special program led by naturalist Lynn Havsall and offered by Blue Hill Heritage Trust on Saturday, August 2.

Using the Hayes field at the base of Blue Hill Mountain as their outdoor classroom, attendees captured bugs with nets and held them in special viewing containers provided by Havsall. The viewers featured magnifying lenses that allowed participants to look at each creature up close before releasing it back to its habitat, according to a news release from the trust.

A teacher who attended the workshop said the experience helped to “take away the fear factor” associated with certain insects. “I learned that the sharp-looking thing on one of the bugs wasn’t a stinger but an ovipositor for laying eggs,” she said.

One of the youngest adventurers in the group, a 4-year-old girl, came to the event interested only in butterflies but ended up catching and befriending several other creatures, including a bumblebee she wanted to take home. After Havsall explained what happens to a bee if it is separated from its own group and hive, the girl readily let it fly away.

Havsall generously serves as a resource for Blue Hill Heritage Trust and other local conservation-minded groups.

BHHT’s program was part of a series of free outdoor events inviting families to explore the benefits of conservation land and to join as Blue Hill Heritage Trust members. For a full schedule of events or to become a member, visit their office at 258 Mountain Road, Blue Hill, or go to bluehillheritagetrust.org.