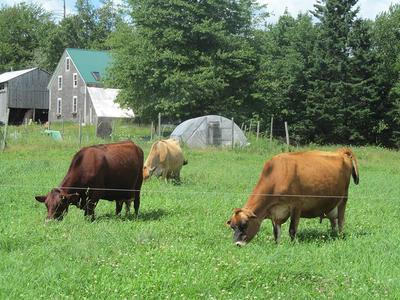 Three cows graze at the farm at Quill’s End Farm in Penobscot.

While lingering in the shade of a large tree and savoring the frosty delights of homemade ice cream, a group of more than 20 people shared their impressions of the cows, pigs, chickens and other creatures they had encountered, and reflected on the complexities of farming, food availability and society. Thus was the conclusion of the tour at Quill’s End Farm in North Penobscot.

Phil and Heather Retberg hosted the farm walk and talk on July 18. It was the second such event sponsored by Blue Hill Heritage Trust this season, with the first held at King Hill Farm in June.

The Retbergs describe themselves as grass farmers, a designation which speaks specifically to the agricultural process in which they are involved.

“Our primary product is grass. We harvest that with different animals and turn it into something else,” Phil Retberg explained. The various animals provide the Retbergs with eggs, milk and meat that they sell outright from Quill’s End Farm or process into different products, including yogurt and heavy cream.

As Heather Retberg explained, grass farmers “must pay a lot of attention to the soil.” Properly managed animals can help to improve conditions, she said.

And even piglets can play a valuable role in soil care. They snout through unused garden beds, tilling and aerating the soil in addition to eating larvae of insects that may be potential pests.

“We’re growing bacon, lettuce and tomato all in the same place,” said Heather Retberg. As the piglets eat and continue to add weight they will be market-ready in six to eight months, depending on the breed.

The Retbergs are gradually transitioning woodland into pasture, a process that requires nuanced grass farming techniques after the area has been partially cleared. Phil Retberg elaborated on what is involved, including the careful introduction of non-native grasses to the area. This is an important step because the native varieties are short-lived, with small blades or leaves, and typically die off in June. The addition of other species keeps more grasses in a longer vegetative state, meaning more food is available for animals for a longer growing season, he said.

To this end, the Retbergs cyclically plant oats, which are considered a nurse crop in that they offer a sort of shelter for other grasses by providing an early, fast ground cover and out-competing weeds. The oat grass can then be mowed off, leaving the lower or slower-growing varieties of grass to come up. These nutritious but slow species would otherwise fade from the picture, the Retbergs said.

Phil Retberg also explained a theory held among grass farmers which posits that a savanna-type scenario—where there exists a broad grassland, fed upon heavily by ruminant herds and having some trees for shade—is likely the most productive landscape for grass farming.

A similar scene can be achieved on a small scale with the right elements in balance. Retberg likened it to the relationship of bison to their environment in the old west: “They didn’t just graze; they left a path of destruction.” Retberg explained that when plants are grazed heavily and much of the leafy part of the organism disappears above ground, roots also die off underground in order to give energy back to vegetative or leaf growth. Decomposing roots release nutrients into the soil. This dynamic occurs at Quill’s End Farm, with the cows being the grazers, and this is a desired outcome.

Another important element of grass farming is the symbiotic relationship between ruminants and birds—or in this case, cows and chickens. Phil Retberg described how chickens clean up after cows when they scratch through cow dung. The chickens can find grubs and parasites in the cow patties, and they scatter the fecal matter, which decomposes more quickly when teased apart.

This is a critical service to the cows, as Retberg explained, because cows will not graze in an area in which they have defecated—called a zone of repugnancy—in order to avoid re-entry of parasites. In clearing cow excrement of parasites and scattering the waste solids, chickens hasten the reduction of zones of repugnancy, and the cows can return sooner to graze in these spots. This in turn allows for even grazing by cows over time, and an efficient and productive field results. Even grazing also keeps areas of weeds from developing, Retberg said.

As serious as the Retbergs are about grass, it’s no surprise that they possess strong opinions on the subject. Alfalfa is often heralded as the “king” of grasses, but Phil Retberg lightheartedly challenged this notion, stating that he refuses to “bow down before the altar of alfalfa,” as its hay often ends up being disproportionately high in stems versus leaves. He would much prefer a mixture of other grasses and clover, he maintained.

Blue Hill Heritage Trust volunteer Judi Hilliker noted that not only do farm tours benefit people by allowing them to learn about the food they eat, the events are also good for the farmers who participate. “It’s easier for people to come to farms to get food…when they’ve met the farmers,” she said. “If not, it can be intimidating to go down someone’s driveway.” 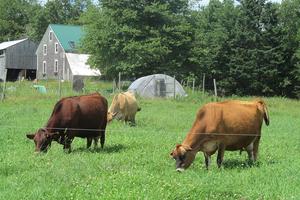 Three cows graze at the farm at Quill’s End Farm in Penobscot. 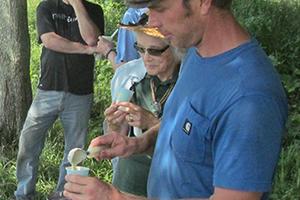 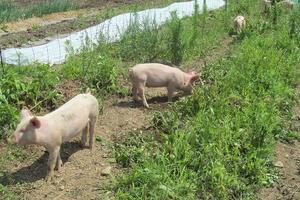 The piglets of Quill's End Farm