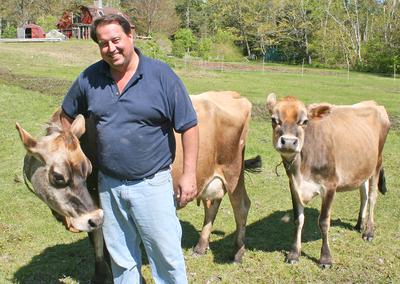 Farmer Dan Brown of Blue Hill, Maine is headed to the state Supreme Court which will hear oral arguments on his appeal. Brown sold unlicensed raw milk that came from Sprocket, at left. Sprocket’s daughter Princess stands at right.

Blue Hill farmer Dan Brown of Gravelwood Farm will have his day in court—again.

Brown was charged by the Maine Department of Agriculture with selling raw milk without a license and two other violations in 2011. After the parties failed to settle the case in mediated negotiations, Hancock Superior Court Judge Ann Murray issued a summary judgment in April 2013 in favor of the Department; she upheld her decision in June, fined Brown $1,000 and subsequently denied a motion to stay judgment pending Brown’s appeal to the Maine Supreme Court.

The state’s highest court has agreed to hear the appeal to be argued by Brown’s attorneys, Sandra Collier and Gary Cox.

Oral arguments in the appeal will be heard on May 13 in Portland.

“I believe this means the supreme court of Maine believes the issues involved are very significant,” Cox wrote in a widely circulated email. Cox is the general counsel for the national organization Farm-to-Consumer Legal Defense Fund.

Brown and his attorneys have argued that the right to sell unlicensed raw milk is covered under the Local Foods and Self-Governance Act passed in Blue Hill in 2011 and Maine Home Rule statutes.

Murray disagreed, stating in her summary judgment that the ordinance did not cover raw milk sales and that preventing enforcement of state safety laws “could have serious public health consequences.”

Since Murray’s final ruling, the Maine 126th Legislature has voted on two bills relating to the sale of raw milk. The first, LD 1282 was passed by the House and Senate in 2013 but vetoed by Governor LePage, who objected to farmers market sales. The second, LD 1786, was given an Ought to Pass vote by the Legislature’s Agriculture Committee on March 28 but died in the House and Senate the following week. That bill provided for direct farm-to-consumer sales from farms, farm stands and restaurants attached to farms.

“With the lack of progress in our legislature, I think winning this case is imperative, not just for me, [but] for everyone in the state of Maine,” Brown wrote in an email asking for support.

Since the court injunction to stop selling unlicensed raw milk, Brown has filed for bankruptcy and taken up lobster fishing.