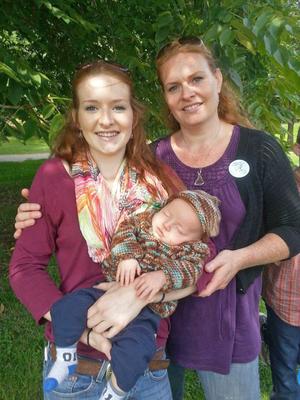 Alorah Gellerson, at left, with son Carson Powers and her mother, Tania Allen, at a September 5 rally in Cascade Park, Bangor. The rally was held in support of Gellerson’s use of a goat milk infant formula.

The Maine Department of Health and Human Services has closed its investigation into Alorah Gellerson. The agency notified her of its decision the day a rally was held in her support.

The young Brooklin mother, who had two surprise visits this summer from DHHS caseworker Christine Leighton, was told that feeding a goat milk formula to her infant son, Carson Powers, was endangering his health.

On August 5, Leighton said if Gellerson did not bring Powers to Eastern Maine Medical Center for an examination, he would be taken from her care. The four EMMC doctors who examined Powers found him healthy, Gellerson said, but their decision to release him was overridden by Dr. Lawrence Ricci, who DDHS uses in child abuse and neglect cases. Ricci has never examined Powers.

Gellerson and Powers were released after one night in the hospital, and the DHHS scheduled a September 5 appointment with Ricci, which it cancelled about two weeks later.

At issue for Gellerson and her mother, Tania Allen, who researched and created the goat milk formula, is the contents of that notification.

The letter cites reasons for DHHS opening its investigation, Gellerson said in a recent interview, that had nothing to do with goat milk, including residual THC from marijuana use in Power’s meconium—the earliest infant stool.

Gellerson, in a recent interview, said she stopped any marijuana use upon finding out she was seven weeks pregnant, and subsequent testing during her pregnancy supported that.

“We don’t want to hide anything,” said Allen, who cited Gellerson’s age—16—when she discovered she was pregnant.

A third reason cited in the DHHS letter for its investigation was that Gellerson allowed Powers to sleep on his belly.

“None of those things were mentioned when [Leighton] came to do the investigation. It was all about goat milk,” said Gellerson.

The DHHS letter’s closing statement reads: “DHHS’ concern has only been that Carson is being fed appropriately and is growing and thriving.”

Gellerson and Allen plan to write to the DHHS so their version of the investigation is on official record.

A Bangor rally in support of Gellerson and the practice of feeding infants goat milk still took place on September 5, the date of the originally scheduled appointment with Dr. Ricci.

“People knew that the doctor’s appointment had been canceled before the rally, but decided to hold it anyway,” said Bonnie Preston of Blue Hill, who attended the rally in Cascade Park.

The rally drew around 50 people and featured several speakers, including Gellerson.

“We all agree here that it is absurd to think that…I am somehow putting my baby at serious risk by choosing to feed him this way,” Gellerson told those at the rally. “Parents who are selfish, careless, abusive and neglectful need to be paid attention to, not me. Food, education and medical choices are a parent’s alone to make. Let us not become people who sit back and allow government to make choices for our families.”