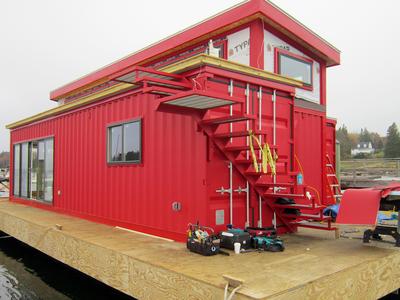 The houseboat made of metal storage containers moored at the boatyard before its journey to Belfast.

In one bay of the Brooklin Boat Yard facility, a crew was laying up the hull on a new sailboat.

In the next, another crew removed a gas tank from a 40-foot motor boat, and upstairs, on the wall were the designs for a new 74-foot sailboat.

But it is a bright red houseboat tied up at the dock at the boatyard that has been turning heads in town.

That’s right. A houseboat. Aside from its striking red color, the remarkable thing about it is that it looks pretty much like what it is: two metal shipping containers, offset and joined together by a wall that extends up to a second floor loft, set on a barge.

The houseboat is the latest project to go into the water at the boatyard, the brainchild of owner Steve White.

“I had some investment property that I sold and I was looking for something to do,” White said recently. “I had this idea about a houseboat. I’d seen articles on building them and I kind of liked the idea.”

He has a friend who runs Snap Solutions in Brewer, a company that modifies steel shipping containers into buildings: offices, security buildings for construction sites and residences.

“He got excited about it,” White said.

What they created is a 24’x40’ building with about 1,000 square feet of living space, including two bedrooms, a living room and kitchen, set on a 30’x50’ barge. The containers are offset, creating a geometric figure on top of the barge.

The barge is basically a box, White said, but the flotation part of the project proved challenging.

The flotation is provided by plastic pontoons, cylinders filled with foam. They are impervious to salt water, he said, and very sturdy once they are in the water. However, they are not very strong out of the water and the weight of the barge would have crushed them.

So they had to support the barge on blocks until the whole unit was ready to be launched.

“That made it more costly and more difficult to build and to launch,” he said.

White added that he had miscalculated the overall weight of the houseboat, so as the project went on, he had to add more flotation. But, they also had to leave room for the trailer that would move the houseboat down to the shore for the launch at low tide.

So on launch day, once the houseboat was towed to the shore, the barge had to be blocked up again, the trailer moved out, the final pontoons installed and the barge closed up in time for it to be floated at high tide.

“We only had about six hours to do it,” White said, “so there was a time pressure. We aborted the first launch; we just didn’t have the time.”

The second launch attempt was successful and the barge was towed to the boatyard dock where crews are doing the finish work, which is pretty much the same as would be done on a regular home. The electrical work is almost completed; crews were adding the final sheathing to the upper story, and inside, they were laying a hardwood bamboo floor.

The houseboat has a propane gas furnace that provides radiant heat in the floors.

White said some have questioned using regular sheetrock in the house boat, raising concerns about the effect of moisture on it.

But he points to the sheetrock in his office just feet away from the water, noting that it has held up pretty well.

The plumbing is a little different than normal since it has to be adapted to be hooked up to shoreside facilities.

Once it’s completed, the houseboat, which has no propulsion of its own, will be towed to Belfast Harbor where it will be moored at his Front Street Shipyard.

“I thought that would be a good place to moor it,” he said. “I’d be able to rent it out, or lend it to high-rolling clients, or even use it as a getaway.”

However he uses it, the houseboat will not be the prototype for a new line from Brooklin Boat Yard. It’s one and done for houseboats as far as White is concerned.

“I’ll be happy to consult with someone who wants to build one,” he said, “I’ve learned enough, so I know what not to do.”

The houseboat made of metal storage containers moored at the boatyard before its journey to Belfast. 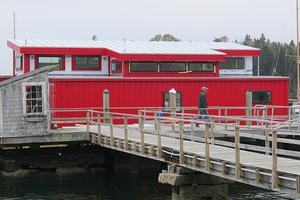 Brooklin Boat Yard recently “launched” this one-of-a-kind houseboat made of metal storage containers. It will soon make its way to the Front Street Shipyard in Belfast where it will stay.