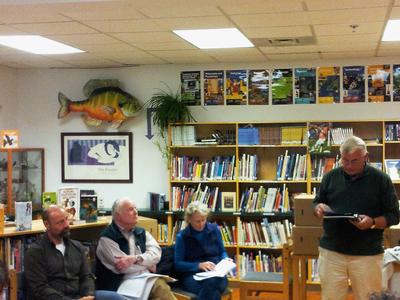 One person’s trash is not another person’s treasure in Brooklin as voters gathered to appropriate funds that paid to clear a large amount of debris from a private property at 736 Bay Road.

A November 19 special town meeting began with a warrant article asking for $4,400 to pay for the disposal of materials collected from the property. According to the town’s tax commitment records the property owner is listed as Carol Damon.

According to members of the board of selectmen and the town’s Code Enforcement Officer Judy Jenkins, the saga began with a written complaint from a neighbor about the junk being collected at the Bay Road property. That written complaint compelled the town to take action, said Jenkins, noting that traditionally the town does not step in to regulate collected materials of a private property owner. However, continued Jenkins, the property owner was cooperative and allowed the town to clean up the property.

The work to remove objects, such as boats, cars and a multitude of other items, was done by David Webb and his company at no charge to the town. Chairman of the Board of Selectmen Albie Smith said that Webb volunteered equipment and two days worth of labor to remove the items.

Voters asked the selectmen if the town intended to pursue the payment of the bill by the property owner, but learned that there were no plans to go that route. “We could bill the owner, put a lien on the property and then take it, I suppose,” said Jenkins, but added that the future costs to clean up the property in its entirety was estimated at $30,000. Jenkins, who said the property owner was a hoarder, divulged that the extent of the collection went far beyond what was visible on the outside.

“These kinds of decisions are going to be done on a case by case basis,” said Selectman Mike Roy, when asked if the town thought it was setting a precedent by absorbing the costs for the cleanup.

Resident Olenka Folda said there was a similar situation occurring at a property beside hers and asked if the town intended to pay for the cleanup of all property in similar situations. The selectmen, in unison, said they did not believe this action would set a precedent in town.

In other business, voters accepted a four-acre parcel from Virginia Haynes (map 5, lot 22A) that is connected to the back of the school’s ball field. The selectmen said they have no plans at all for the parcel, but said they thought it may be beneficial to the town given its relation to the Brooklin School. The property, said Smith, is assessed at $3,000 and the tax bill is $18 a year.

Voters also approved the transfer of funds from two accounts to the town landing account to “cover shortfalls” associated with town property, including lawyer fees paid to settle right of way issues at Center Harbor and “to a lesser extent,” said Roy, the recently donated Dow property.