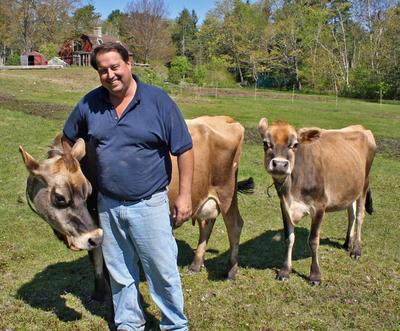 Dan Brown, of Gravelwood Farm, with Sprocket, at left, the cow whose milk Brown sold without state licenses, causing the Department of Agriculture to initiate a civil suit against him. At right is Sprocket’s daughter, Princess.

On the same day Dan Brown of Gravelwood Farm in Blue Hill filed for bankruptcy following a court injunction to cease selling unlicensed raw milk and milk products, a Brooksville farm was approved by the Department of Agriculture to sell raw milk through retail and wholesale establishments.

Deborah Evans and Laura Livingston of Bagaduce Farm in Brooksville applied early in May to the Maine Department of Agriculture for a license to sell raw milk as a milk distributor. They were granted a license on May 22 by state inspector Renee Blais.

“She is licensed to sell,” said Blais in a May 28 telephone call.

“We wanted to begin the discussion with the Department of Agriculture inspection people to find out what we had to do,” said Evans. “Our assumption [was that] for us to milk one cow was going to take a level of investment that was way beyond our level of investment so far.”

However, Evans was surprised to find that state requirements for milk production she had heard from other farmers—like stainless steel sinks, a self-closing door and running hot water—requirements Brown said he was told by state inspectors he needed to qualify as a milk distributor—did not come into the picture.

“The fact that we ended up qualifying for a license was a huge shock,” Evans said, who paid $25 for the license, which entitles Bagaduce Farm to free sampling and water tests and technical advice on best practices, according to the Department of Agriculture.

“They felt that what we were doing and the way we were milking—directly into a strainer on top of a sanitized jar—met performance requirements of what they thought was appropriate for our scale. They permitted us under ‘scale appropriate,’” said Evans.

Evans carries in hot, soapy water by the bucket to a bay of her garage she uses as a milking facility, to wash the cow’s udder and for hand washing. After milking, she washes the rubber mats the cow stands on with that water.

Evans said her milk—from one cow—has not yet been tested by the department, but an inspector is scheduled to pick up samples on June 3. She has sold her milk—labeled according to department regulations—at the Local Food Exchange in Blue Hill on May 25 and at the Brooksville farmers’ market on May 28.

On April 27, Hancock County Superior Court judge Ann Murray ruled against Dan Brown on all counts in a suit initiated by the Maine Department of Agriculture in early 2011. The three counts were: selling milk without a license; selling unpasteurized milk without labeling it as such; and operating a food establishment without a license. At that time, Brown milked one cow.

According to court documents, Brown acknowledged selling milk without licenses and told inspectors “he had no intention of obtaining” the licenses, relying on the Local Food and Community Self-governance Ordinance passed in Blue Hill in 2010. Nine Maine towns have passed a similar law, including five in Hancock County.

In her ruling, Murray wrote that the ordinance “clearly frustrate[s] the purpose of the state law,” and supported the State’s contention that Blue Hill may not exempt individuals selling milk from the statutory licensure requirements.”

Before Murray’s ruling, however, Brown did try to become properly licensed as part of a court-ordered mediation process with the Department of Agriculture, but said a verbal okay by dairy inspector Jim Bartlett to use a rubber mat on his wooden milking platform—as Evans uses at Bagaduce Farm—vanished when Brown asked for it in writing. According to Brown, he was informed he needed a concrete milking platform.

The Department of Agriculture’s Maine Milk Rule—the rules governing Maine milk and milk products—states that a milking barn, stable or parlor have a floor of concrete “or equally impervious materials,” a self-closing door and that water shall be “from a supply properly located, protected and operated and shall be easily accessible.” Hand washing facilities should include “hot and cold or warm running water.”

“The big thing is highlighting the process,” said John Bott, director of Special Projects/Communications for the Department of Agriculture in a May 29 telephone call. “Whether someone requests our assistance makes a difference.”

In a prepared statement sent to The Weekly Packet that same day, he wrote:

“The Department of Agriculture, Conservation and Forestry (DACF) has decades of history helping farmers (large and small) find ways to meet the licensing requirements.

“Because Bagaduce Farms applied for a license, the Department’s dairy inspectors worked with Bagaduce Farms to find a way to meet site specific minimum requirements to sell raw milk.

“Department employees conducted an inspection and worked with the farm to identify the requirements for selling raw milk.

“Bagaduce Farms demonstrated how it would meet the requirements for sanitary conditions. The Farm was able to satisfy the Department dairy inspector that this process would fulfill the standards for a safe and wholesome product.

“The solution reached with Bagaduce Farms is typical of how the DACF works with farmers who request assistance to find legal ways to produce local products (in this case dairy) for local consumers.

“The Department has seen a significant increase in the production and licensing of raw milk. The Department encourages others to contact the Department if they have questions about starting milk or food businesses.”

“We have this feeling it’s not an equal application of the law,” said Evans, who advocated for passage of the local food ordinance in Brooksville, approved by voters earlier this year after it failed in 2010. “We need to encourage the department to uniformly be using a performance approach. It’s about our practices, not whether we have a stainless steel bucket. It’s what we do with that bucket.”

Brown is appealing Judge Murray’s ruling, but said without the income from his milk and milk products, he can’t afford to buy grain for his cows.

“We were barely hanging on. We were just making our monthly payments, paying a little bit here and there,” he said. His attorneys filed a request for bankruptcy in Hancock County court on his behalf; he is waiting to hear whether the court accepts his request.

He also waits for confirmation of a court date on two motions filed by his attorneys, Gary Cox of the Farm to Consumer Legal Defense Fund and Sandra Collier of Ellsworth. The first motion asks Murray to reconsider her original decision in favor of the Department of Agriculture. The second asks Murray to stay the injunction pending Brown’s appeal. Murray will also rule on civil penalties against Brown at that time.

In the meantime, Brown is “trying to ramp up” the produce side of his seven-acre farm, selling seedlings from his farm stand on Morgan Bay Road and planting double the space he did last year for vegetables, in an effort to make up lost income from milk sales.

“This whole thing has sucked the life out of me,” Brown said.