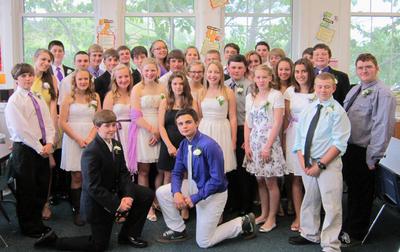 The eighth grade class at the Blue Hill Consolidated School poses one last time before their graduation ceremony began on Friday.

Beneath a canopy of purple and white, and surrounded by balloons and silhouettes of themselves, the 33 eighth-grade students at Blue Hill Consolidated School became graduates Thursday night, June 13, during ceremonies at the school.

After processing to the stage, the students introduced each other to the audience of friends, family and teachers and then led them on a slide show of their years at the school that included memories of dissecting owl pellets and singing “Down by the Bay,” as well as class trips to Boston and Camp Kiev. That was followed by a second slide show of the eighth-grade trip to Baxter State Park.

The evening was filled with music, most of it provided by members of the graduating class. The performances included “Ave Maria” by the Woodwind Ensemble, “Colors of the Wind” performed by Sarah Mullen, Jordan Gray and Alizza Muise, a Bach “Cello Suite Gigue” by Celia Hurvitt, “Take Five” and “Tiger of San Pedro” by Crazy Eights Jazz Band, “Bouree” by Summit Colman, Mariah Reinke, Mira Schubeck and Joe Boulet and “Skylark” by Small Ensemble.

Sharon Dunbar, representing the Ramasoc Chapter of the Daughters of the Revolution, presented the DAR American History Award to Trent Williamson and the DAR Good Citizenship Award to Kyle Rice. 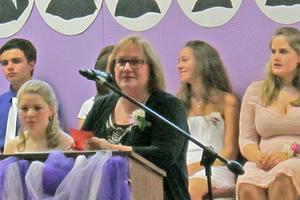 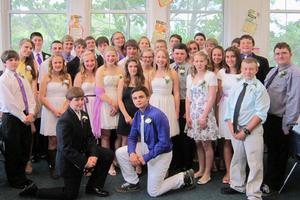 The eighth grade class at the Blue Hill Consolidated School poses one last time before their graduation ceremony began on Friday.