Blue Hill
Originally published in The Weekly Packet, July 3, 2013
Small farms on the rise in Maine
Despite challenges, industry poised for more gains 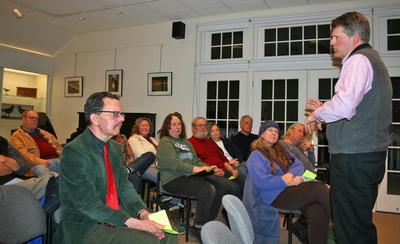 The challenge for small, local farms is “to scale up without losing small-farmer values,” said John Piotti of Maine Farmland Trust at a Blue Hill Heritage Trust talk at the Blue Hill Library.

“The story of agriculture in Maine in the last 15 years is that farms have found how to go around the middlemen and sell direct.”

When people think of farming in Maine, they picture silos and big equipment, potato, dairy and blueberry farms. But people’s perceptions lag behind the reality, said Piotti.

Small-scale farms in Maine have grown, to the tune of 7,000 to 9,000 new farms in the last 15 years, while commodity farming is in decline.

If the growth in small, direct-to-consumer farms was happening “in any other industry,” Piotti said, “Business and government would see it as a big business opportunity.”

The two tracks of farming

“Marketing defines their difference,” Piotti said. Yet, the two, very different types of farms support each other.

The economics of small farming depend on big farms, which lower the price of supplies, like grain, for everyone.

And the 400-acre potato farms in Aroostook County that sell millions of pounds to national corporations benefit by the increased awareness small, local farming brings. First, local governments are more sensitive to how infrastructure and other decisions affect farms, and second, their customer base expands. Some of those farms are now planting 10 to 15 acres of organic heirloom potatoes for direct sale to East Coast restaurants.

Why the future of farming looks good in Maine

“Is farming the key to Maine’s future?” Piotti asked. “The answer is yes.”

At present, Maine is the top New England state for agriculture, and it has the potential to be “a big food state,” Piotti said, for four reasons.

First, is land: While Maine now uses 1.3 million acres for agriculture, 100 years ago, before the rise of commodity farming, that number was 7 million acres. Those acres have not been lost to development.

Second, Maine has an abundance of water, and any future climate changes will only increase its supply. While Maine aquifers “replenish on a 20-year cycle,” Piotti said, in the Midwest “the water will be gone soon. They are on the edge.”

Third, is location. Maine’s latitude means good growing conditions, which are determined by sunlight, not how cold and long the winter is. Plus, Maine farming pioneers, like Elliot Coleman, have invented ways of “increasing the growing season without using fossil fuels,” through greenhouses.

The fourth reason why farming could be a bigger industry in Maine is who we are, Piotti said. “We’re part of the world that still sees community connections. We get it.”

The biggest challenge right now is losing the farming land base, Piotti said. When farmland changes hands, new farmers must usually pay developer prices, which can’t be met by farming. With 400,000 acres of “very old” farmland, the problem of farmland in transition is coming up fast.

The good news, said Piotti, is that 275 people are looking for farms in Maine right now, according to Farm Link, an organization that matches those looking with those selling.

“And I think 50 percent [of them] have been apprentices at Paul [Birdsall]’s farm,” Piotti said.

Birdsall, of Horsepower Farm in Penobscot, has helped Maine Farmland Trust create Forever Farms, a program where MFT buys agricultural easements on property to keep it safe from development. The program was inspired by BHHT program Farmland Forever, which Birdsall also helped pioneer. At present, 2,300 acres on Route 15 in Blue Hill and Penobscot is protected, much of it in the hands of local, small-scale farms.

Sixteen bills that could positively affect local farming were introduced in the current Maine legislative session. Some never made it out of committee, while others garnered close votes in the House and Senate, with some now waiting for the governor to sign or veto. Brooksville passed a food sovereignty ordinance in March, to join four other Hancock County towns, while Isle au Haut passed a similar ordinance in June.

“Unless statutory and legal changes can take place, these ordinances will be moot,” Schatz said.

Piotti said MHT may engage in some type of lobbying during the next legislative session, despite a mix of “traditional” and “progressive” board members.

On a national level, “constant vigilance” is required to potential changes in agricultural policies. One recent proposed policy that was not signed into law “would have crushed local agriculture,” Piotti said.

The challenge for small, local farms is “to scale up without losing small-farmer values,” Piotti said, because the “vast majority of consumers are not buying from farmer markets, fine restaurants and CSA’s,” which are the direct markets small farmers mainly sell to. Maine is “a day’s travel from heavily populated areas [like Canada] that need food.”