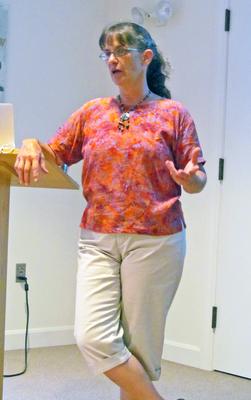 Jo Barrett, of Land For Good, an organization that helps connect farmers with farmland, spoke at the Blue Hill Library on July 15, part of the Good Life Center’s summer program.

Jo Barrett, Maine field agent for Land for Good and former owner and operator of King Hill Farm in Penobscot, spoke at the Blue Hill Library on July 15, as part of the Good Life Center summer series of lectures and workshops.

Land For Good is a New England-based organization “specializing in farmland access, tenure and transfer,” according to its website.

In the words of Barrett, Land For Good “connects farmers looking for farmland with service providers, services they may not have thought of,” such as Maine Organic Farmers and Gardeners (MOFGA), Beginning Farmer Resource Network (BFRN) of Maine, Maine Farmland Trust and nonprofit community land trusts that lease land to farmers.

With 70 percent of current farmland expected to change hands in the next 20 years, the United States Agriculture Department (USDA) is making a major push to get young people involved in farming, Barrett said, by providing grants to organizations that help perpetuate farms, such as MOFGA, which has received federal funding for its farm apprenticeship and journey person programs, and BFRN of Maine.

But the “number one stumbling block” to young farmers is finding affordable land, Barrett said.

Searching for farmland in a time of development

Between 2000 and 2008, farmland values have doubled in the United States, driven by foreign investors and development pressures, said Barrett.

But the agricultural value of land is based on the quality of its soil, not its development possibilities, and how much income it can produce for farmers.

There are two potential sources for farmland: land that belongs to retiring farmers who would like to see their farm continue, and land from “community-oriented” landowners who aren’t farmers but are willing to lease or sell to farmers.

It can be “harrowing” for non-farmer landowners to sell to farmers, Barrett said, because of the difference in land prices for farming as compared to development. Yet many people, who can afford to, want to do just that.

For retiring farmers, keeping their land for farming means facing an often complex task involving their own financial needs and the desire to leave an inheritance for their children.

Land For Good connects both landowners with specialists like tax attorneys and accountants, information on setting up land trusts or easements, and often the farmers themselves.

One example she gave was landowners who owned several acres that they vacationed on for two weeks a year, but wanted to see their land used for farming.

Land For Good not only connected them with farmers for their land, but also helped both sides navigate the specifics of their contract.

“A lot of what we do is sitting at the kitchen table with people,” she said.

The economics of farming, simplified

The start-up costs of farming are daunting even without the burden of purchasing or leasing land, Barrett said. The costs of treating soil, purchasing equipment such as tractors and industrial size salad spinners, buying seeds and livestock, irrigation costs—all drive food production costs higher than its market price.

The actual cost of raising, say, a chicken, Barrett said, may mean a selling price of $5 a pound.

U.S. consumers pay less for food than it costs to produce, Barrett said, in large part because of USDA farm subsidies, which drive down food prices across the board. Yet, 75 percent of USDA subsidies go to “huge agribusiness” for mainly soy and corn production used to produce high fructose corn syrup and hydrogenated oils used primarily in “junk” food.

“If folks can pay 99 cents a pound [for chicken], it’s hard to convince them it cost $5 to produce the chicken,” she said.

Barrett, taking off her Land For Good hat, said that low food prices in the United States—the lowest in the Western world—are also based on exploitation of workers, animals and the environment.

Farming as a community

It takes more than organizations to build and maintain a farming community, Barrett said. She cited Paul Birdsall, owner of Horsepower Farm in Penobscot, who had the idea of using agricultural easements to preserve fertile land for farming, and then helped start two such programs: Farmland Forever, a Blue Hill Heritage Trust program, and Forever Farms, run by Maine Farmland Trust.

This is one example of how the farming community is larger than just its farmers.

There’s also the “angel investor,” Barrett said, who “quietly coughs up the money so the [land] deal can go down.”

Consumers who support CSAs (community supported agriculture), prepaying for weekly farm food deliveries before the growing season begins, and who buy local food at farmers’ markets and stands, are another arm of the farming community.

And those who pitch in each year for the carrot harvest at King Hill Farm, a tradition Barrett started that continues today, where people gather to pick 20 to 25 tons of root vegetables over two days, carrying home a supply of their own at the end, is another example of how farms contribute to the community, Barrett said.

Land For Good is the part of the farming community that helps connect all the other parts.

“Many organizations provide specific services. Land for Good is like a general contractor or coach,” Barrett said. “We keep our thumb on the pulse of the process.”