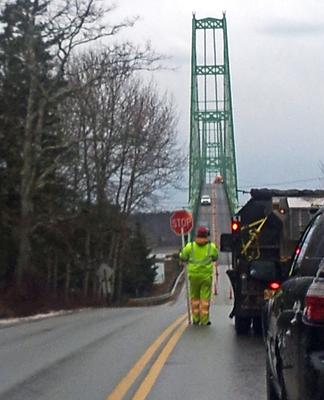 Traffic stopped on Tuesday, December 10 on the Sedgwick side of the Deer Isle-Sedgwick Bridge. The months-long work project will continue through mid-February.

The single-lane traffic that has slowed travel on and off Deer Isle will continue for a little while longer as crews have been given until February 12 to complete the rehabilitation work on the 75-year old Deer Isle-Sedgwick Bridge.

Initially work was slated to stop in mid-December, but the Maine Department of Transportation granted additional time to complete the work which includes replacing and upgrading various parts of the bridge such as bolts, nuts, cables, and joint parts.

According to a press release from MDOT issued on Wednesday, December 11, there will be no work from December 23 through January 1, but traffic restrictions will continue after that date with a minimum of one lane of traffic during the work hours of 7 a.m. to 5 p.m. On Mondays, from 7 a.m. to 9 a.m. crews will remove all lane closures and open the bridge to unrestricted traffic.

Maine DOT spokesperson Ted Talbot said the work is progressing as expected. “With a bridge that age, you never know what you’ll find,” he said. “But so far, nothing unexpected has come up. There’s been some surfacing work done, tightening cables, getting rid of rust.”