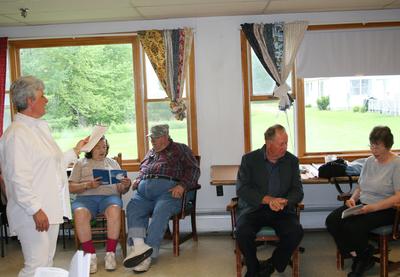 Pastor Rose Krienke, from the Franklin Street Methodist Church in Bucksport, offered a prayer and led a sing-along at “Penobscot Nursing Home Day” on May 31. The song followed a proclamation given by Selectman Paul Bowen, seated right of center, that celebrated residents, staff and volunteers.

“Whereas Penobscot Nursing Home has served its citizens well…[we] will honor and recognize our family, staff and volunteers,” he read from the official document, which also “urge[d] every citizen to honor its elderly.”

“We’ve been around for 50 years,” said Stanley Shorey, head of maintenance at Penobscot Nursing Home and a town selectman. “There’s been so much attention, we wanted to give a different [perspective],” he said, recognizing the ongoing court action brought earlier this year by Maine Department of Health and Human Services to close the nursing home and sell its bed licenses to First Atlantic Corporation, which is building a new facility in Bucksport. The matter has been extensively covered by local news organizations, including the Penobscot Bay Press newspapers.

Rose Krienke, pastor from the Franklin Street Methodist Church in Bucksport, led the opening prayer before breaking into “Amazing Grace.”

Organizers said this was just the first activity in a day meant to highlight the people who make the Penobscot Nursing Home a community center for its elder members and the people who care for them—families, volunteers and staff.

“This is a way we could thank them,” said Shorey.

“We have a very dedicated staff,” said Elaine Towne, director of residential carewho came to PNH around nine months ago. “It’s a very warm atmosphere [here]…and very unique how everyone is related to some point.”

Jen Dakin, of Northport, who is fulfilling her clinical hours towards a certified nursing assistant degree, agreed. “Here, you get to attach to the [residents],” she said.

“It’s definitely more lively than I thought it would be,” said fellow student Brittany Albert of Brewer.

After the morning sing-along, everyone moved onto the patio for a picnic, followed by a piano performance, a birthday party for residents born in May, a karaoke contest and finally, a performance by John Matthews and the Blue Hill-Billies.

“This is a statement to the community that we are doing great,” Director Irving Faunce noted.

The potential closing of PNH is opposed by the Town of Penobscot, and Penobscot and Blue Hill are seeking a legal voice in proceedings following the court motion filed on April 6 by HHS to close the facility. PNH has been under receivership by the state since 2008. Neighboring towns have thrown their support behind efforts to keep the nursing home open.