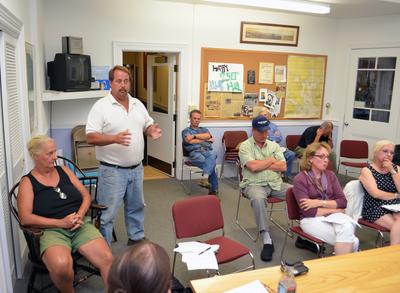 Dan Brown (standing), owner of the Mud Run, addresses the Blue Hill Board of Appeals. Seated next to him is Juliana Brown. Visible in front row are appellants Lisa Poisson (left) and Andrea Nunn.

The Blue Hill Board of Appeals has upheld the Blue Hill Planning Board’s decision to approve a permit for the Deer Run Mud Run. With only a few people in the audience at its July 24 meeting, the appeals board voted 5-0 in a session that lasted only 50 minutes.

On May 24, before a standing room only crowd, the planning board had given limited approval for Dan Brown to hold a previously scheduled race event on May 26 on a 400-foot long racing track for four-wheel drive vehicles. The site is a former gravel pit on Route 176 in East Blue Hill near the town line with Surry.

At its June 11 meeting, the planning board approved five monthly race events this year, and required Brown to reapply in 2013 if he wished to continue the mud runs. (See May 31 and June 14 issues of The Weekly Packet.)

The appeals board, after several years of inactivity, was brought into play following its receipt of three appeals. Two of the appellants were Blue Hill residents Andrea Nunn and Lisa Poisson. The third appellant was Surry resident Christopher Goddu, who lives nearby on Morgan Bay Road.

After calling the meeting to order, chairman Adam T. Gray said that since Goddu was neither a Blue Hill resident nor property owner, he did not have standing to make an appeal, and would not be allowed to address the meeting. Goddu questioned Gray’s ruling, saying that he could find no basis for it in the town’s ordinances, but Gray maintained his position.

In her letter and oral statement with photographs, Nunn alleged violations by Brown of state law on boundary setbacks and buffer zones (Title 38, section 490), questioned “the veracity and reliability of statements made by the Browns to the planning board,” and said that recently the existence of the mud run has reduced the value of her property as she has attempted to sell it. Nunn wrote that one potential buyer told her broker, “No reduction in asking price would be enough for him to consider buying my property due to the proximity of the mud run.”

Section 5.10.10 of the town’s site plan review ordinance says that the planning board determines that “Adequate provision has been made to prevent any undue adverse effect upon adjacent or nearby properties or property values.”

Gray acknowledged the relevance of some of her testimony, and said that other issues were civil matters outside the appeals board’s jurisdiction.

Poisson began her testimony by saying that she and friends in her neighborhood who attended the planning board meetings felt that “the planning board had already decided that they were already going to give Mr. Brown his permit” regardless of what the ordinance or the abutters said.

Poisson’s written appeal focused on issues involving protection of water quality, and erosion and sedimentation control, citing several sections of the ordinance. In response, Gray and Code Enforcement Officer Judy Jenkins said that some of her ordinance references did not apply because they dealt with projects classified as “major developments” such as subdivisions that discharged more than 2,700 gallons of water daily.

In his response, Brown said that Jon Cullen from the Maine Department of Transportation had walked the property with him and that he had no concerns about the mud run. Brown explained that the site, in a former gravel pit, was considered a contained mud run where water was moved from one low-lying place to another, and did not go anywhere off the site.

Poisson also said she was concerned that the planning board had directed Brown to use calcium chloride to control dust on the site which could contaminate her well. Jenkins and several board members noted that calcium chloride was a state-approved chemical that was regularly used to melt ice on state roads.

Poisson said that she too had learned from her realtor that her property had been devalued by the mud run’s proximity and could be “‘difficult’” to sell.

During allotted time, Brown said that he was fully licensed and was only one of three in the state. He also responded to comments about his operation by others, noting additional training given to some of his staff to prevent earlier problems from recurring.

As the testimony was coming to a close, Gray said, “I feel the pain of the neighbors. I really do.” Regarding the property value issue, a planning board member recalled that several years ago, the town had rejected a comprehensive plan that might have helped determine what land uses might be placed where.

Planning Board chairman Peter d’Entremont had also denied Surry residents permission to speak during its meetings on the mud run. In response to a question from the press after the board’s 5-0 vote sustaining the planning board’s permit approval, Jenkins cited a 2009 decision by the Maine Supreme Judicial Court as support for the denial of standing by non-residents. In Nergaard v. Town of Westport Island, the court ruled that the appellants did not qualify as aggrieved parties since they were not abutters and had not “suffered particularized injury.”

As he was leaving, Goddu asked that his $50 filing fee be returned since his appeal was not considered. Gray said that the appeals board was not involved in collecting these fees, and that he should contact the town office.