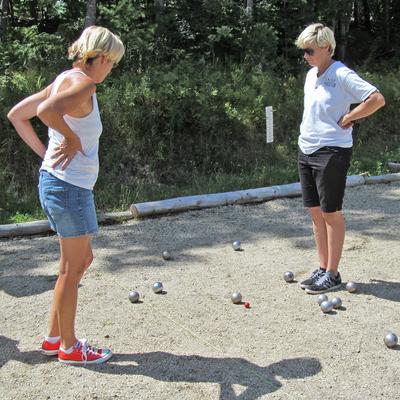 Gina DeJoy, left, and Julie Jo Fehrle discuss the placement of the boules.

While some may call it Boules (from the French meaning ball) and others more formally, Pétanque, it is clear that the game is catching on in Blue Hill. In fact, the town is slated to host the Women’s World Qualifying Championship on September 8 and 9. The home courts are in East Blue Hill at the Boatyard Grill.

The game of Boules is similar to Bocce (which is the Italian word for ball) where metal balls are thrown in an attempt to get closest to a wooden ball called a Jack (or a Cochonnets), which is thrown out first. Players then throw their balls in a specified order trying to either get closest to the Jack or, if the situation merits, to knock the other team away from it. That is the simple version, but well seasoned players know the game can be far more complicated and that strategy can be everything.

“The game may seem like a simple game from all appearances; there are three balls, a wooden ball and you have to get them the closest,” said Boules player Mia Kanazawa of Brooksville, “but it can be infinitely more complicated.”

Kanazawa knows this first hand, and as a Boules player, has traveled to compete internationally. In 2009, Kanazawa travelled to Thailand along with fellow Boules player Cynthia Stroud of Blue Hill to compete. “It was a great experience, but it showed me that there was still a lot more work to be done” to compete at that level, she said.

Stroud has participated in two world championships, in Thailand in 2009 and last year in Turkey.

Blue Hill has a sanctioned chapter of the game—Maine Boules Club—that is registered with the Federation of Pétanque USA. However, it hasn’t always been that way for Boules players on the Blue Hill Peninsula. For many years Boules was played at the home of André Strong and was an add-on to dinner parties. From there it grew to a weekly event at the Strong household, then moving to Blue Hill’s Piper Square until that space became too small for all those interested. Last year the Maine Boules Club was able to secure space at the Boatyard Grill, which for now seems big enough for the current membership.

According to Strong, he started playing in France in the early 1980s, returning to the U.S. with Boules. In 1986 he and his wife, Marjorie Kernan, were married on their home Boule court (with the late Ed Schneider officiating). In the early 1990s he helped to found the Federation of Pétanque USA and has since competed internationally “a few times.” Strong is also an umpire for the sport.

The public is invited to watch the championship tournament over the course of the two days. 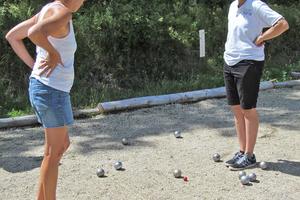 Gina DeJoy, left, and Julie Jo Fehrle discuss the placement of the boules. 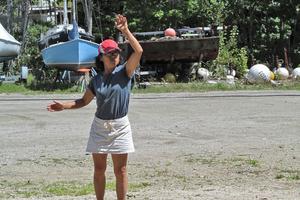 Maine Boules Club President Mia Kanazawa of Brooksville throws during a practice on Sunday, August 19. Kanazawa will compete in the Women’s World Qualifier on September 8-9. 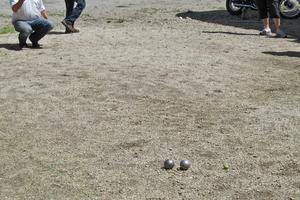 Andre Strong, credited with bringing the game to the area, started playing Boules with friends at his house. Over time the number of people who wanted to play exceeded the space until they found themselves creating home courts at Blue Hill’s Boatyard Grill.