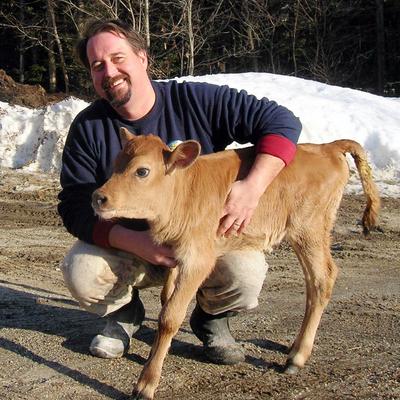 Photo courtesy of the We Are Farmer Brown Facebook page

The Maine Department of Agriculture has served notice to a Blue Hill farmer that he is being sued by the state for selling food and milk without the appropriate state licenses. A Hancock County Sheriff’s Deputy served farmer Dan Brown, of Gravelwood Farm, a summons November 9.

Brown says he will not back down from a lawsuit and is doing so to save his farm, ensure food sovereignty, and give his neighbors a choice as to where they get their food.

As the plaintiff, the State’s Department of Agriculture Commissioner Walter Whitcomb stands behind the suit, saying, “our people found that Brown acted beyond any level of tolerance” and that when you move beyond the philosophical arguments and break the case down to its “elemental facts” that becomes clearer.

Brown, who has operated the 100-acre farm since 2000, was cited on three counts:

Count 1—The defendant has sold or offered to sell milk or milk products to other persons, without a milk distributors license, in violation of 7 M.R.S. 2901-C.

Count 2—The defendant has sold or offered to sell unpasteurized milk in a container that is not labeled “Not Pasteurized” in violation of 7 M.R.S. 2902-B.

Count 3—The defendant has operated a food establishment without being licensed for that purpose in violation of 7 M.R.S. 2167.

The suit seeks relief, in the form of injunctions, restraining Brown from selling milk or milk products, unpasteurized milk in containers not properly labeled, and operating a food establishment (to sell processed foods) without a food establishment license. Brown also faces monetary fines if found guilty.

According to court documents, Brown was observed by DOA inspectors selling milk and food products without the proper licenses five times between January and June. On two occasions Brown acknowledged he did not have the proper licenses and told inspectors “he had no intention of obtaining” the licenses. Brown was also observed on two occasions selling raw milk from his farm stand that was not labeled “Not Pasteurized” as required by law.

DOA inspectors visited Gravelwood Farm on July 26 and took samples from milk and cheese products. The products were found to have “bacteria counts ten-to-fifteen times greater than the allowable limit.” While there is mention of these bacteria levels, nowhere in the court documents is Brown cited for the sale of contaminated products or of endangering the public.

In August, according to documents, DOA “sent a letter to [Brown] advising him that it is unlawful to sell milk and milk products, and other food products, without being licensed by the Department…The Department demanded that [Brown] stop the sale of the products until he is properly licensed, and offered to work with him to expedite the process. The Department received no response…”

Brown now has 20 days to respond in writing to the Department of Agriculture’s charges. He said he plans to contact a lawyer and fight for the right to control the food he produces.

Many in the community have rallied behind Brown and say they stand firmly behind a Local Food and Community Self-Governance Ordinance, passed locally by the towns of Blue Hill, Sedgwick and Penobscot. The ordinance seeks to exempt the sale of food and food products (either grown or processed) from license and inspection providing it is sold directly from a producer to a willing consumer.

The ordinance is not recognized by the state.

Brown and his supporters have created a multi-platform media campaign to share the story that includes a Facebook page titled “We are all Farmer Brown,” a YouTube Video, a Thursday media call and a planned rally at the Blue Hill Town Hall Friday, November 18, at noon.

Brown says the issue is partly about the costs associated with compliance, costs he says can be more than he earns as a family farmer, given the diversity of products needed to sustain a productive farm. The issue is also partly about food sovereignty and the regulatory system as a whole. “The state’s rules and regulations are designed for large business that produce [large amounts] of any given product. That is not me. At the height [of the milking operation] I had six cows, now I am down to one,” said Brown, who adds that he worked in the commercial dairy industry for many years.

Brown claims that a number of years ago he was told by DOA that he could not sell unlicensed products at farmers’ markets, but could sell them directly from his farm. “I took out a loan and built a farm stand,” he said, “but now the rules have changed, there has been a change in leadership [in state government], and all of a sudden I am a milk distributor, rather than a farmer.” Brown estimates the farm produces close to 100 different products, some fresh and some processed.

Brown said he does not believe the lawsuit is about him specifically but about the state “trying a roundabout tactic to defeat the [local foods] ordinance” and “to go after his revenue stream.”

While rallying around Brown, a larger movement is afoot and the claim that “We Are All Farmer Brown” is appropriate, said farmer Heather Retberg of Penobscot’s 105-acre Quill’s End Farm. Retberg, along with her husband Phil and others, spent the better part of the last year-and-a-half drafting the Local Foods and Community Self-Governance Ordinance. They continue to speak out about it the ordinance, saying it preserves traditional farming practices.

“Many farmers are in the same boat and together we are all Farmer Brown as far as it goes,” Retberg said. She said support for the ordinance has stretched far beyond the borders of Maine. For Retberg and many other farmers and community members who fought for the passage of the ordinance, the issue is about local choice and giving the community a say in where its foods come from. It is also about the inherent right of people to make decisions that affect them.

Those planning to gather at the Blue Hill Town Hall are doing so not only to raise awareness of the issue. They also plan to ask the town’s selectmen, at their weekly meeting at 1 p.m., to draft a letter to the state asking it to drop the lawsuit, according to Retberg and Brown.

The Local Foods and Community Self-Governance Ordinance is at odds with state law, in that is seeks to free farmers from regulations solidified in state statute. A town does not have the authority to relax state or federal regulations regardless of the ordinances it passes.

In a telephone interview on Tuesday, November 15, Agriculture Commissioner Whitcomb said the DOA has no interest in destroying family farms or the livelihood of farmers, and believes regulations are necessary to ensure public safety. With more than 8,100 licensed agricultural producers in the state, Whitcomb said it is essential to be able to trace potential problems back to the source. He said that meat, milk and processed foods qualify for inspection under state law and while there are associated costs tied to the business of farming, such as proper processing facilities and stainless steel kitchens, actual licensing fees cost roughly $25.

When asked if he thinks DOA regulations encroach on traditional farming and hurt the small-scale farmer, Whitcomb said “many people have not found the regulations to be onerous” and that dealing in raw milk and other food products is “different than normal merchandise shopping” because you aren’t able to see the bacteria that could potentially harm you. “While the rhetoric pulls at the heartstrings” of many people, Whitcomb said, he is not sure people fully understand the circumstances surrounding this case. “Discussions with Mr. Brown have been going on for some years,” he said. “So to suggest that there is some kind of conspiracy is absolutely not the truth.