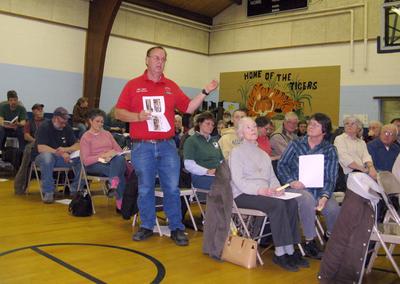 One hundred and twenty-five townspeople braved late winter frost heaves and potholes to attend their annual town meeting on March 8 and overwhelmingly approved a local food and self-governance ordinance that has divided voters elsewhere on the Peninsula.

Brooksville voters defeated the same ordinance by a margin of 9 votes; Sedgwick voters approved it almost unanimously. The issue will come before Blue Hill voters on April 2.

Supporters said the Local Food and Community Self-Governance Ordinance would ensure Penobscot’s right to self-governance regarding the preservation of current farming rights and practices. It is not legally enforceable at this time due to other state and federal laws.

Moderator Sherman Hutchins called the meeting to order promptly at 7 p.m. and proceeded to announce the results of municipal elections that were held on the day before.

One hundred voters turned out to elect officers for several open seats. All of these vacancies were unchallenged.

Newcomer Cheryl Gross won one of the two open seats on the finance committee with 88 votes. The second seat will be filled by appointment as no more candidates were listed on the ballot.

The next order of business was a reading of this year’s municipal warrant, which contained 62 articles. After Hutchins read each article, ample time was given for questions, clarifications, and opinions. Following debate, a vote was taken by a show of hands to determine the article’s fate.

With a proposed budget of $420,000 going into the meeting (a 5.1 percent decrease over last year’s expenses of $442,500), many articles basic to this annual process passed, most with little to no audience concerns.

Article 20 concerned the sum of money the town will raise for the Peninsula Ambulance Corps. From the floor Penny Hatch made a motion to amend the requested amount of $14,780 to $10,164 (last year’s appropriation). The amendment passed and discussion began. PAC Director Geoff Miller was on hand to answer questions, reply to concerns and offer opinion. Ultimately the article passed easily as it was originally written.

Another article that garnered interest was an annual request from the Blue Hill Public Library for a taxpayer-funded donation of $3,400 (an increase of $100 from 2010). The article was moved with the Finance Committee recommendation of zero dollars, and then amended to the full amount requested by the organization.

Ellen Best, a member of the library’s board, lauded the library’s services, including high-speed Internet access. “The library’s existence is a tremendous resource to all,” she said.

As part of the discussion, Selectmen Chairman Paul Bowen described the seriousness of the economic times, which has resulted in many people being unable to pay their property taxes, thus putting their homes at risk of foreclosure. Unpaid property taxes, Bowen said, are at an all-time high of $153,870 for the last fiscal year. He also said that since 2002 the state school subsidy has dropped from $481,077 to $10,797 in 2010 (a loss of $470,280). He said that the town’s voting citizens should take all articles into careful consideration before a vote.

Bowen also said the Finance Committee’s recommendation of zero dollars was possibly a result of taxpayer support for BHPL being deemed a discretionary item and non-critical service. Audience member Pat Henry suggested to Best that “maybe” BHPL should consider charging a fee for a membership card. Best replied that this has been considered. As discussion died down, the article passed by a 62-31 margin.

Bowen made a motion to amend this article and designate an additional $10,000 from taxation. This would raise the total to $100,000. He cited this year’s harsh weather and the need to avoid a financial shortfall as the previously mentioned remaining balance of $7,390 has already been exhausted.

This amendment passed, which results in an increase in the total budget to $430,000. In Article 54, Bowen announced that upon its passage ($23,350 will be appropriated from taxes) the final payment on the school septic loan would be made. This article passed easily.

All ordinance items on this year’s warrant passed with no controversial debate. A Wind Energy Systems Ordinance was described by Millinocket attorney Michael Harman as being needed in part to prevent any large industrial wind farm towers from being built. Harman is a former Penobscot resident who was asked to speak on behalf of the Planning Board.

At the close of discussion about the local food ordiance, voters overwhelmingly passed it.

Article 36 asked townspeople to accept a revised shoreland-zoning map (as required by the Maine’s DEP). Liz Snow, of the Planning Board displayed this updated map and advised regarding its necessity. This article also passed easily.

As the crowd thinned out to about 50 people, voters considered 17 School Budget articles. Penobscot’s 2011-2012 school budget stands at $1,492,216 (up by $52,600 or 3.6 percent) from the current school year figures. This year, the School Committee and the Finance Committee were in agreement on all articles.

Concerns by voters were raised about the high cost of special education and the need for it, the close ratio (nearly 3 to 1) of paid school staff to students, and the cost per student attending Penobscot Community School.

Much of the discussion centered on questions concerning clarification of certain wording. School Union Superintendent Mark Hurvitt advised that some wording was confusing and he would look into it. Hurvitt also addressed the audience, stating that there is a small possibility that the state would raise its school subsidy to somewhere in the neighborhood of $16,000 (up from the previously mentioned and current subsidy of $10,797). 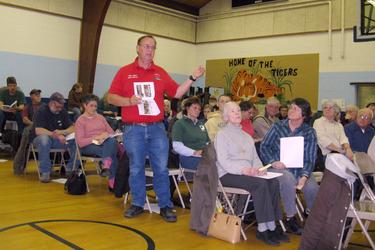 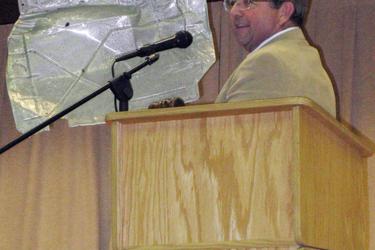 Moderator Sherman Hutchins takes a minute while the Penobscot town meeting assembles to show some of the car parts he found on the Bay View Road. He said gigantic frost heaves in front of his house separated the parts from the cars to which they once belonged. 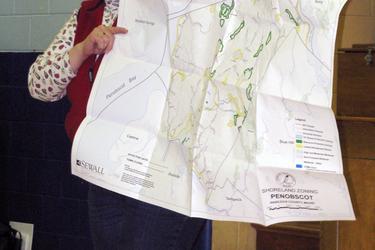 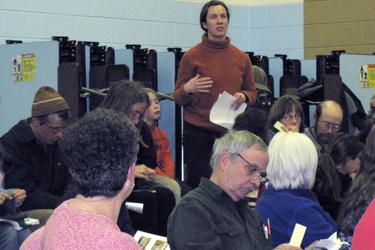