Surry
Originally published in The Weekly Packet, March 5, 2020
Under Canvas Acadia to return to planning board
Site plan review application continued to March 11 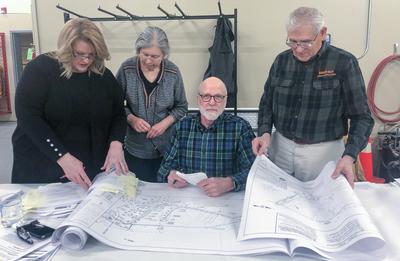 Glamping, or glamorous camping, is one step further toward a home in Surry after the Bozeman, Montana, company Under Canvas presented its site plan review application to the planning board February 26—and to the crowd that filled the fire station/meeting room, a last-minute venue change because of an anticipated high attendance.

Public comments were largely in favor of the project. Opposed to the project were the site’s abutting neighbors.

“My attitude has evolved,” said George Borowsky. “They have been responsive and exhibited a certain amount of flexibility.” He did request that agreements Under Canvas has made be made conditions of the application.

The Surry Conservation Commission also finds the project palatable, helped by the $17,000 check Under Canvas brought to the meeting, for water testing in Lower Patten Bay, through the Shaw Institute, with $3,000 promised per year after.

“The Commission had concerns but [Under Canvas] addressed them,” Commission Chairman Tom Minogue said.

To assure citizens worried about wood stove particulate emissions, Under Canvas agreed to use EPA-certified stoves. To assuage Dark Skies Association proponents, Under Canvas will work with the association to be compliant with its standards, with a small, lit entryway sign, muted lighting inside tents and no lights on internal roads or electrical hookups in tents. A gravity-fed septic system is proposed, as well as dry ponds for storm water runoff. A Department of Environmental Protection permit for those plans, earlier approved, has been rescinded for what Under Canvas representatives said were minor details.

“We are committed to low-impact development,” Under Canvas Development Officer Dan McBrearty said.

McBrearty said a preliminary assessment shows that the taxes paid to the town would balance the increased burden on town services, and a 20,000 gallon cistern will be on site that the fire department could pull from.

“I commit our company to pay our fair share,” he said. “We’re willing to sign on to that.”

With “a good $1 million a year cash out the door for services and goods” at the existing seven Under Canvas campgrounds, all located near national parks, McBrearty said local businesses would benefit. Comments from local business owners were more than favorable.

“Tourists like ice cream,” said Eric Treworgy, co-owner of Pugnuts. “The spending potential of these tourists…will benefit us in terms of jobs and direct benefits.”

Wesmac owner Steve Wessel concurred: “I feel bad for the abutters but it will be an asset to the town.”

Abutters do not find the prospect of 123 glamorous camp sites an asset.

“What is allowable may not be beneficial,” abutter Burton Lowry said, speaking also for Arden Carlisle.

Abutters are upset over a crowded shorefront, drifting smoke from 123 wood stoves and, for Carlisle, septic system and storm water runoff.

“Under Canvas is throwing money at the Town of Surry so all ears are perked up,” abutter Karin Gehris related via text message and email for Lowry to share. She listed property values, peace and quiet, and odors as risks, stating, “I think this is an atrocity in this rural area….I see my property value plummeting. Who’s going to bear that?”