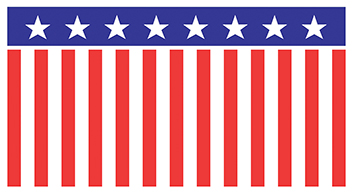 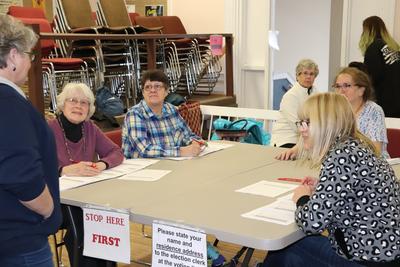 In Blue Hill, ballot clerks check in voters arriving at Town Hall to cast ballots in the presidential primary and state referendum.

The majority of votes cast in the 10 peninsula and island towns in the Democratic Presidential Primary went to Bernie Sanders with 936 votes, followed closely by Joe Biden with 928 votes.

Local voters also agreed, by a large margin, with the rest of state on keeping the strict new law on vaccinating schoolchildren.

“It’s been a bloody battle on Facebook,” Cormier said.

But Donna Brewer, Stonington ballot clerk, said she couldn’t tell whether excitement over the Democratic Presidential Primary or the vaccination question attracted a steady stream of voters.

Voters had to decide in a referendum whether to keep the new law requiring all schoolchildren to be vaccinated or to allow exemptions for religious or philosophical reasons. People throughout the peninsula and island overwhelmingly voted to not repeal the state’s vaccine law. In every town, the vote was at least 2-to-1 against repealing the law.

With 91.6 percent of the state reporting, 73 percent voted no and 27 percent voted yes. It was the only referendum question on the ballot.

Locally, slightly more voters, or 29 percent cast a “yes” vote to repeal the law, while 71 percent voted against it.

In the presidential primary, so many Democratic candidates had dropped out of the race by Super Tuesday that local voters were left with only four candidates who could draw double-digit votes in each town.

In Stonington, George Powell said he’d wanted to vote for Amy Klobuchar because she was the only candidate who didn’t yell at everyone. In the end, he voted for Sanders. “I have issues with him, but it couldn’t get worse,” he said.

President Donald Trump coasted to victory in the Republican primary. He was virtually unopposed, garnering 89,437 votes statewide with 93 percent of the state reporting.

Springlike weather helped with turnout, according to ballot clerks.

In Blue Hill, Town Clerk Etta Perkins said Augusta sent them 400 Democratic ballots. That wasn’t nearly enough, as Blue Hill ran out at 4:30 and used absentee and photocopied ballots. Those had to be hand counted—all 175 of them, Perkins said.

In Sedgwick 507 people voted out of 998 registered. In Stonington. 631 of the town’s 917 registered voters cast ballots.

Also in Stonington, George Powell brought a poster reminding Democrats to attend the party caucus at Deer Isle Town Hall on Sunday. “It would be nice if more people got involved,” Powell said.