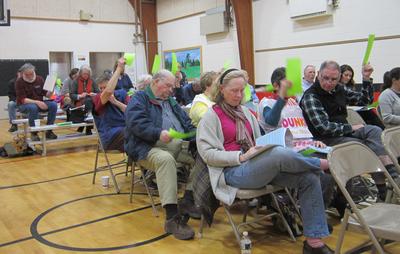 Voters raise their cards to approve or disapprove warrant items.

Voters here gave overwhelming approval to additional funding for George Stevens Academy, but not without some discussion.

Voters had breezed through the school articles, approving the $2 million-plus school budget with few questions. The sticking point was the separate article—the last on the warrant—that asked whether the town would increase the Insured Value Factor paid to GSA by $300.

The school, a private academy that serves as the high school for a number of area towns, initially had sought a much larger tuition increase in an effort to alleviate budget woes that stemmed in part from a significant decline in the number of foreign boarding students at the school. Deb Ludlow, a Brooksville resident, GSA graduate and a GSA trustee, provided some of the history that led to the funding request noting that the state-set tuition does not cover the cost of educating students at GSA. She explained that the academy had been running on an extremely tight budget for many years, until the international boarding program brought an infusion of cash.

The GSA trustees had initially proposed a tuition increase of $2,700, to be implemented over the next three years, in an effort to close the budget gap. Ludlow stressed that the $300 increase in the IVF this year will not meet the school’s financial needs, and that the budget crunch will be worse next year as more Chinese students graduate, taking with them the $50,000 annual fee they were paying.

Although the additional cost was a concern for some residents, it was the lack of information about the GSA budget that rankled. The lack of transparency in the school’s operations has dogged trustees since they made their initial funding request. Brooksville School Committee member Barbara Black Chapman said the lack of information about the high school’s budget made it difficult for her to respond to questions about it in the same way she can about the elementary school budget. Voters at Town Meeting have the option to vote for or against individual items in those budget lines, she said.

Ruth Robinson noted that the town’s budget and advisory committee had requested copies of the last three GSA budgets so they could compare the budgets and…see how you have managed and adapted to the lack of Chinese students. That information was never forthcoming.”

And Gail Ladd, while praising the school where several generations of her family have attended, voiced concerns about having to increase public funding for the private institution.

“I’m reluctant to think about having to come up with the money for something that is a private entity,” she said.

Other residents, however, voiced support for GSA and for providing the funding it needs.

John Altman said he didn’t want the school to think about reducing programs to meet the budget.

“I don’t want you to be making cuts; I want you to improve,” he said, noting that the elementary program costs about $1.2 million, which he said amounts to about $19,000 per student.

Christine Black summed up the opinions of several residents noting that GSA provides students with the education they need to succeed and urged residents to provide the funds it needs to continue.

“It doesn’t matter whether it’s $300 or $2,000, we need to give GSA what it needs to successfully operate and go forward and work for our kids,” she said.

“They deserve it,” one man said.

Ludlow promised increased transparency in the academy’s processes, but stressed that various trustees had different views about what transparency means.

“It’s a slow process,” she told residents. “But we will have it resolved before I stand up here next year.”

The vote in favor of the additional funding, which already had been included in the budget, was overwhelming with just one person voting against the proposal.

In other action, voters approved all of the municipal articles on the warrant without too much discussion. One small hiccup in the process came in the discussion of the funds for the town’s participation in the Blue Hill-Surry Transfer Station.

In the warrant article, the amount recommended was $95,247, an increase of about $300 more than last year. Selectman John Gray moved to increase that amount to $102,516. He noted that the lower amount had come from the town of Blue Hill and, when selectmen checked, they were assured that the figure was correct. According to Gray, however, the selectmen had been given the figures for the town of Brooklin, and Brooklin had been quoted the Brooksville figure.

The higher amount, which voters approved readily, represents an increase of $7,593, about what selectmen had anticipated.

Voters did approve $15,000 for the town to use to investigate with Brooklin and Sedgwick tri-town solid waste removal options for the future. Gray explained that the towns had begun that process over concerns that costs might increase significantly as the Blue Hill-Surry facility moved to use the new Fiberite facility in Hampden.

Although the increase this year was “not too bad,” Gray told voters that the selectmen wanted to have those funds available for the future.

“We still want to study the options just in case those costs do go sky high,” he said.

Voters also approved $12,750 to fund engineering costs at Betsy’s Cove. Mark Shaughnessy, chair of the harbor committee, explained that the retaining wall at the landing is “sliding into the cove.” The funds will cover the cost of a second study to the area beneath the parking lot and the retaining wall as the committee develops a plan to replace both.

Once that plan is complete, Shaughnessy said, the committee will come back with another request that will be significantly higher, even though they hope to obtain grant funds for the project.

After Road Commissioner Mark Blake asked why his pay rate had been cut from $23 per hour to $22.66 per hour, residents voted to increase the wages to the higher amount. They had increased the rate last year, and that’s what Blake had been paid, but the higher amount did not make it onto the 2020 warrant.

There were no contested elections this year in town voting.