Surry
Originally published in The Weekly Packet, March 19, 2020
No planning board vote on Under Canvas Acadia application
To be continued at third meeting 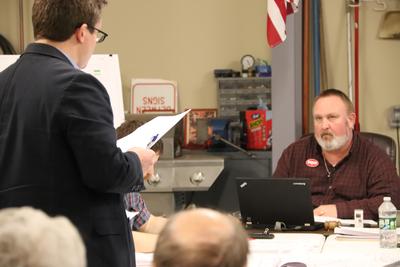 Ellsworth attorney Patrick Lyons, of Eaton Peabody, representing Under Canvas, addresses Chairman Bill Barker and the Surry Planning Board at a March 11 meeting.

A March 11 planning board meeting over a site plan review application by glamorous camping company Under Canvas adjourned after five hours, with a continuation scheduled for Wednesday, April 1.

Given the current coronavirus situation, the meeting will still take place, Planning Board Secretary Darcel Winslow said, as long as an electronic or digital means of holding the meeting is arranged. Emergency legislation passed March 17 allows public meetings to be held in that manner, as long as the public can hear all participants.

The two previous meetings with Under Canvas were held in the fire house to accommodate the number of interested citizens.

Under Canvas presented its application on February 26, hoping for a conditional approval, but planning board members were not ready for a vote after three hours of information and public comment, and adjourned the meeting until its March meeting.

At the March 11 meeting, after five hours of discussion,the full board was still not ready for a vote, and asked Under Canvas to return on April 1.

“I felt the application was complete and in accordance with Surry’s Unified Development Ordinance,” Code Enforcement Officer Tim Ferrell said via email. “I am not sure what conditions are under consideration,” he added, having left the meeting at 7:15 p.m. “My impression, and I may be the only one who feels this way, is that certain concerned parties have sidetracked the review process with issues not included in the Site Plan Review Standards set forth in the UDO.”

Planning Board Chairman Bill Barker did not respond to requests by telephone and email for comment by press time.