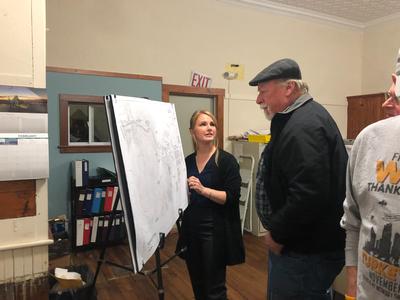 Justine Drake, of CES Inc., discusses draft plans for a solar farm off Caterpillar Road with an interested citizen at a March 10 Sedgwick Planning Board meeting.

A site plan review application to construct a solar farm off Caterpillar Hill Road was deemed complete by the planning board March 10.

“It’s unusual we get this level of preparation in an application,” Acting Chairman Michael Rossney said.

The board set a public hearing for Tuesday, April 7, followed by a planning board vote on the application.

The applicant, Lowell, Mass.-based Borrego Solar, proposes fencing in a five-acre area on 19.9 acres of existing blueberry fields leased from Bruce and Annette Grindle (Tax Map 3, Lots 68 and 68A). Solar panels would be erected on one-half acre and connect with a nearby Emera power substation. The bulk of kilowatt hours generated would be sold to Emera for the company to distribute among its customers statewide.

Project developer Matt Swansberg said the proposal is contingent on the project’s acceptance into a state program, noting that where the project falls within the program would determine how the community could share in the electricity, but there are ways.

The state is set to start accepting projects into the program on April 17, with an auction to set the rate for kilowatt hours. The results of the auction will be announced in the summer “and we’ll have a sense of where we end up,” Swansberg said.

Because the parcel is under 20 acres, no stormwater plan is required by the Maine Department of Environmental Protection, but Swansberg said one was completed anyway. The company still needs an interconnection service permit with Emera before it can qualify for the state program.

Abutters and close neighbors expressed concerns to some planning board members prior to the meeting over depreciation of property values and noise. Borrego Solar has contracted with CES Inc., of Brewer, and CES engineer Justine Drake said testing had determined that the decibel level to the nearest abutter would be at the level of whispering. She submitted the test evaluation to the board.

Any environmental impact would be minimal, if at all, Borrego said, as the parcel doesn’t contain wetlands. The fence will be raised six inches from the ground to allow small wildlife access to the site.

Solar panels have a life of about 20 years, and a decommission plan was also submitted to the planning board. The board has discussed what type of surety to cover the decommission Borrego needs to include.

The full application is at the town office for review, and a digital copy will be placed on the town website, sedgwickmaine.org.