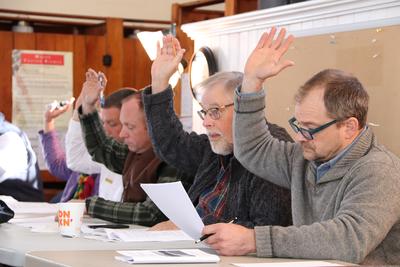 Voters approved $624,000 at town meeting March 7 to fund everything from town government and fire fighting to preserving town records and exploring a new three-town transfer station. An education budget of $2,715,277 also passed, for a $3.1 million total budget for 2020-21.

The school budget represents a 4.89 percent increase, mainly from nine more students set to enroll in high school than currently, and teacher and staff salary increases and health insurance costs.

“This does not have to do with the issue of GSA raising their tuition,” School Board Chairman Marti Brill noted.

Voters will address a George Stevens Academy request for $300 in additional per-student tuition for 2020-21 at a special town meeting come spring. However, Elkington noted that historically not only will it be the largest number of students going to GSA but that “several parents have moved into town for the purposes of sending their kids to high school” from a town with school choice.

Zoe Tenney, a Sedgwick resident and GSA trustee, addressed voters: “I hope we go in the same direction as Penobscot and Brooksville,” towns that approved the request at town meeting last week.

While all education articles easily passed, the rising cost of education did not go unnoticed.

“Almost every year there’s a rationalization for increasing the school budget,” one citizen noted. “Any chance next year of reducing?”

The question may have brought a round of laughter, but Elkington’s response was serious.

“The chances of the school board coming back to you with no increase, we’d have to make cuts. Salaries and insurance go up,” he said.

But concerns over the cost of local education is not just for those footing the bill. “There’s going to be conversations about that,” Elkington said, hinting at ongoing discussions among superintendents without elaborating further.

In addition to the GSA tuition request, a new snow plow contract and funding snow removal will also be handled through a special town meeting, and those costs will then be added to the budget.

A request for $15,000 to legally explore creating a transfer station for Sedgwick, Brooklin and Brooksville passed, as it did in Brooksville. Brooklin voters will address this at their April 5 town meeting.

The reason is fear of rising costs at the new Fiberight facility in Hampden, and that the facility is not fully operational and trash is being landfilled rather than being converted to biofuel, which Fiberight was built to do, Selectman Ben Astbury said. Sedgwick has long used the Blue Hill-Surry Transfer Station, as did all five peninsula towns on a year to year contract basis. Blue Hill /Surry signed a 15-year contract with Fiberight effective April 2018.

One article, to authorize selectmen to ”sell and dispose” of tax acquired property,” requested each year, drew some pointed comments.

“At what point does the town take action?” asked one citizen. “If you don’t pay taxes, when does this happen?”

“We grapple with this each year,” Astbury said. “When do you (the town) step in?”

Not only were firefighting articles approved—$106,000 for new equipment, fire truck loan repayment and operating costs—but Fire Chief David Carter received a warm round of applause.

“This is what it costs to run our department,” Carter said. “We couldn’t do it without your support.” He noted that the $30,000 request from surplus for firefighting equipment will in fact be funded by a $30,000 grant from the Stephen and Tabitha King Foundation.

Voters also established a cemetery reserve account, funding it with $800, and quickly approved all charitable requests but two: a $100 request from Maine Public and a $500 request from Ellsworth-based Families First. Maine Public receives some state and/or federal funding, and Families First, a first-time requester, did not provide sufficient information, budget committee members noted. The committee recommended against both, and voters agreed. 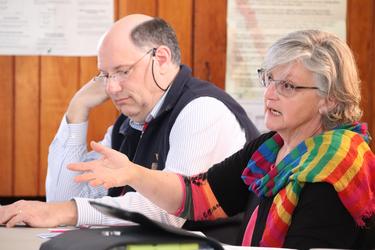 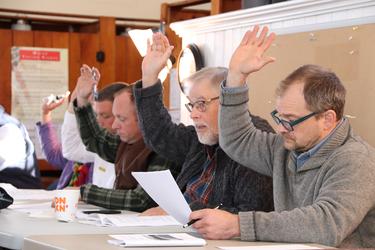 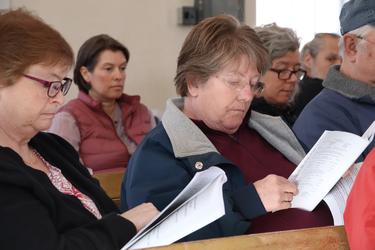 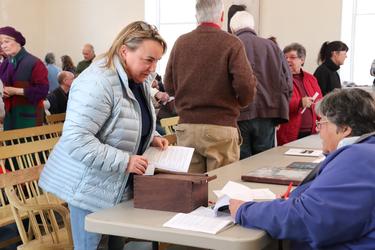