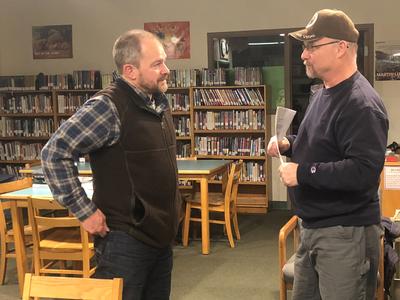 The Sedgwick School Board unanimously approved a $2.7 million budget proposal for 2020-21, up $126,607 or 4.89 percent because of higher special education and high school tuition costs. Using $65,000 in balance forward and projected state funding of $242,000 will lower the increase to taxpayers to 3.7 percent.

“We worked a long time on this and had to make some hard choices,” school board member Elizabeth True said.

The increase in high school tuition comes from more projected high school students, not an increase in tuition paid to George Stevens Academy, as the independent school requested.

That decision likely will be decided by a referendum vote tied to six other towns—all sending towns to GSA—also approving the increase.

“Referendum makes the most sense because it would better represent the will of the town as a whole,” First Selectman Michael Sheahan said, noting low attendance at town meeting. The referendum would be held “when we had enough information to act on.” Sheahan attended the meeting with fellow selectmen Ben Astbury and Robert Publicover.

The board unanimously approved the School Warrant for Town Meeting March 7, which includes an article on the GSA tuition request:

“To see if the Town will vote to authorize the School Committee to enter into agreements with other Towns or Schools for the 2020-2021 school year for the tuition of secondary students up to the legal limit established by the Maine Revised Statutes for the education of its secondary students.”

In all, secondary tuition is up $121,245 for a total $776,940, with 64 students projected, 52 of which attend GSA or, for a few, another private school. The additional $300 per GSA student would add $15,600 to the budget, prompting Chairman Marti Brill to warn that the additional amount could endanger pre-K funding.

Pre-K through eighth grade enrollment, now at 86, is projected to increase to 89, with 12 new pre-K students to replace the current 12-student-strong eighth grade class.

Cut from the 2020-21 budget are kitchen staff hours, one day of music education and one day of counseling, for a $15,000 savings, along with smaller cuts to supplies and the like.

The town will vote on the proposed school budget on Saturday, March 7, at Town Meeting.