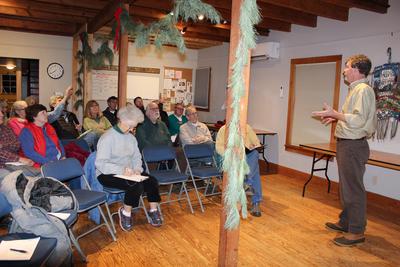 Northeast Civil Solutions President Jim Fisher speaks to a crowd at The Gatherings on December 30 on a proposed glamping site in Surry.

Under Canvas, a glamping, or glamorous camping, company headquartered in Bozeman, Montana, held an informational meeting at The Gatherings Monday, December 30, on their latest venture, Under Canvas Acadia.

Last year, it purchased a 101-acre former farm on Ellsworth Road that enters near the Surry-Ellsworth line and stretches down to the shore. The Maine Department of Transportation has approved the entrance as is after a traffic study this summer, and Under Canvas hopes the campground will be operational by July 4.

Pre-application material was submitted to the planning board in late November, and this meeting fulfilled the Department of Environmental Protection requirement of two site location of development meetings on waste and stormwater plans before a site plan application is submitted.

That application packet, including the MDOT traffic study, was submitted in late December, said engineer Jim Fisher of Northeast Civil Solutions in Scarborough, in hopes of being on the January 22 planning board agenda. He noted at least two more planning board meetings, including a public hearing, will be held.

The site draft shows 123 camp sites, a commercial kitchen and a communal bathroom. In Fisher’s words, an “over designed” septic system will use gravity to flow wastewater to a large holding tank that would pump the gray water back up the site for dispersion in a leach field. Toilets will be low flow and the pull-chain showers will drastically reduce water use, Fisher said.

“It’s a step up, but it’s still camping,” Fisher said.

The company also tries to impart a green angle to its glamping experience, asking guests to reuse towels and bed linens over daily washing. Camp sites are projected to use 60 gallons per day, with the laundry/kitchen adding to a projected 11,500 gallons daily.

Stormwater, based on a 25-year storm model, will flow “in a controlled fashion” into six dry detention ponds spread throughout the site.

Many people expressed doubts over using a 25-year storm model in an era of changing climate, with one citizen stating Under Canvas was “using archaic standards.”

Other comments raised traffic concerns, pollution from the wood stoves, the benefit or lack of to Surry and, with a 24/7 staff on site, finding employees in an area hit by labor shortages every summer.

The property will be taxed as a commercial site, but overflow spending from tourists will mean local dollars, Fisher said, noting Under Canvas encourages campers to explore local restaurants and seeks to partner with local businesses to add to the camping experience.

With Under Canvas eying the January 22 planning board meeting, it plans an informational meeting on the business itself January 21 at The Gatherings at 6 p.m.