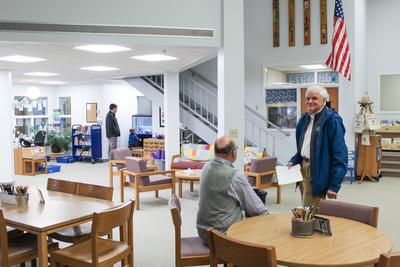 Blue Hill Consolidated School opened it doors January 15 to celebrate the completion of $2.4 million renovation to the pre-K through 8th grade school.

“That’s fantastic news right there,” Superintendent Mark Hurvitt said to a cafeteria crowded with students, staff, parents and the architects and engineers who spearheaded the project.

The school, first built in 1939 and added onto in 1991, is unusual because it sits in the heart of Blue Hill, with students able to walk to the library and other downtown spots, Hurvitt said, while most elementary schools are built on the outskirts of town. “That’s a huge asset. No other school around here except Castine has that.”

The renovation project began in 2015 as a conversation between Hurvitt and school board chairman Jan Snow.

“At first, it was all about electrical panels and doors,” Hurvitt said.

A zero-interest state loan of $330,000, with one third forgiven, awarded in 2016, jump started the project, with subsequent funding from taxpayers, the town’s surplus account, and a $1.5 million loan from Bar Harbor Bank and Trust, at 2.49 percent interest over 15 years. “We jumped on that,” Hurvitt said.

The project first went out to bid in 2017, but the one bid that arrived was too high. A second bidding round in 2018 brought Nichols Construction to the table, and Craig Nichols was among those thanked at the open house, along with BHCS Facilities Manager Doug Mangels, architects Matt Carter and Joshua Tunic, and engineer Peter Tuell of CES Inc. of Brewer, the engineering firm that partnered on the project.

Much of the improvements are not as noticeable, such as the sprinkler system, gymnasium floors and siding repairs, electrical wiring, a new intercom and telephone system, and insulation.

“Every nook and cranny in this school was touched in the last two years,” Hurvitt said, noting “The selectmen have been great. They were with us the whole way.” 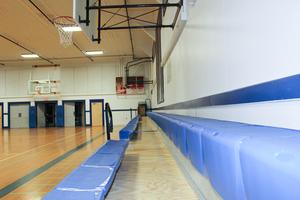 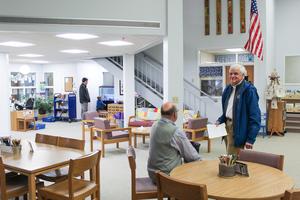 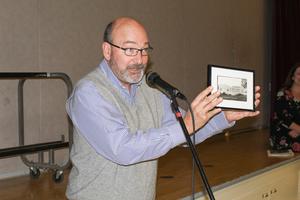 Superintendent Mark Hurvitt shows a photo of the original 1931 elementary school in Blue Hill. The occasion was a January 15 open house celebrating a $2.4 million renovation.