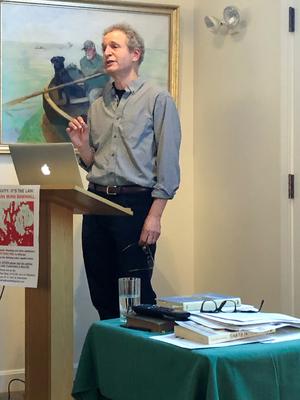 Rick Traub speaks on his proposed ordinance that would ban the use of pesticides in Blue Hill, with some exemptions, at the Blue Hill Public Library in December.

A petition to bring a proposed Blue Hill Healthy Ecosystem Ordinance to voters this March has fulfilled the signature requirement of 10 percent of voters in the last gubernatorial election, or 168 signatures.

Actually, Rick Traub, the force behind the ordinance and citizen’s petition, with Semena Curlik and Gabriella Wellman, said that over 230 signatures had been gathered, but they would continue to collect them for another week or so.

The proposed ordinance begins: “The Town of Blue Hill hereby finds and declares that it shall be its policy to eliminate Toxic Pesticide use in and on public and private property in order to promote a healthy environment and protect the public from the hazards of Pesticides, and for implementation of sustainable land and building management practices on all public and private property.”

This includes athletic fields and open green spaces, areas many people don’t realize may use pesticides.

Traub is particularly focused on glysophate, the fungicide used in popular weedkiller Roundup, which is at the center of a number of lawsuits, some of which have settled in the millions of dollars over negative health results from contact with the chemical.

“It’s a serious problem here,” he told a crowd at the Blue Hill Public Library in December.

Of the billion pounds of pesticides used annually in the U.S., 287 million pounds were glysophate in 2016, up from 13.9 million pounds in 1982, according to a National Geological survey. Glysophate is approved by the Environmental Protection Agency as safe to use as directed.

“Pesticide residues are in up to 70 percent of produce sold in the U.S.,” Traub said.

Traub has organized three educational meetings around the ordinance. The first brought organic farmer and author Eliot Coleman. Next, on Tuesday, January 14, Ellsworth naturopath Dr. Marly Sachsman will speak on pesticide use and health, at the library at 7 p.m. A third meeting will be held on Tuesday, February 11, “The Impact of Pesticides on the Environment,” with the speaker to be announced.

To read the entire proposed ordinance and for information on pesticides, pesticides in food, and health concerns, visit bluehillhealthyecosystem.com.