Blue Hill
Originally published in The Weekly Packet, February 6, 2020
Pucks fly as teams tear up the ice for annual tournament 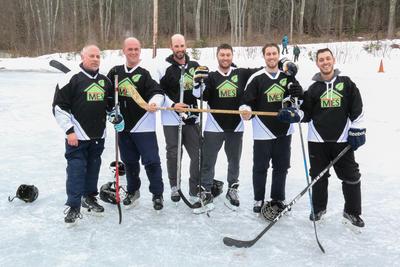 Ice chips scattered under the skates of a lively gang of hockey enthusiasts at the Peninsula skating rink on Saturday, February 1, for the annual Peninsula Pond Hockey tournament.

With a warming fire burning and music playing, cheering fans milled about stoking a friendly yet competitive atmosphere as six teams faced off on the ice throughout the day, testing their talents for the prize of taking home the golden stick and the joy of the game.

After a long series of heavy skating, two teams remained to battle it out in the final, “Noah’s Ark” ultimately triumphing over “Ogie’s Revenge” with a sweeping goal in overtime by Jameson Welch of Ellsworth.

An unusually mild afternoon made for some challenging conditions on the ice, with Rob Cushman, a member of the “Gnome Wranglers” referring to the surface as being “really scrappy.” This was despite the best efforts of the snow shovel wielding Zamboni crew, who skated and smoothed the rink in tandem between games.

The tournament is a fund-raiser for the rink, which is owned by the town of Blue Hill and maintained by a group of dedicated volunteers called the Peninsula Skating Association. According to chairman Rich Boulet, the tournament raised around $850 for the rink this year. “I wish the weather had cooperated a little better,” he said.

Begun in 2009, this marked the tournament’s 22nd year, and it is as popular as ever. “We’re really lucky to have this event happening in Blue Hill,” said River Vogel a member of the “Maine Gretskys,” “it brings people together from all over the county.”

The association started out as a small group of volunteers in the mid ’90s, according to Peter d’Entremont, a former volunteer and current spectator. “I got involved because I wanted to make sure they didn’t put up an ugly building.” It remained relatively small for a few years, with the original warming shed even burning down at one point, according to d’Entremont. Emphasizing the community focus of the rink, d’Entremont pointed out that in recent years “it’s turned into a nice facility for the whole area.”

Watching the skaters rush up and down the ice, d’Entremont reflected on his recent move away from Blue Hill, describing the rink as “a good example of the way people come together and do things,” something he misses about not living here.

The Peninsula skating rink is open to the public at certain times and depending on the condition of the ice. A schedule of public skating times is available at townofbluehillmaine.org/peninsula-skating-association. 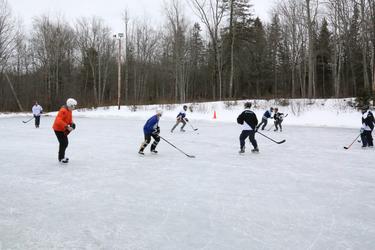 Members of “Ogie’s Revenge” and “Noah’s Ark” face off in overtime for the chance to win the day. 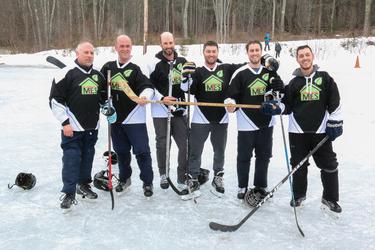 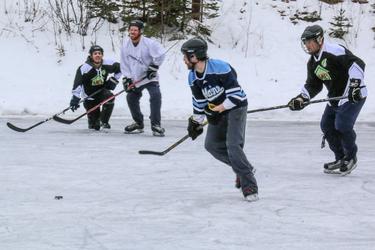 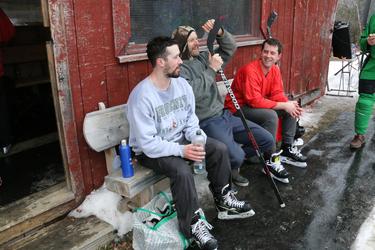 From left, Chris DeVore, Rob Cushman and River Vogel enjoy a break after a long game at the Peninsula Pond Hockey Tournament on Saturday, Feb 1, in Blue Hill.