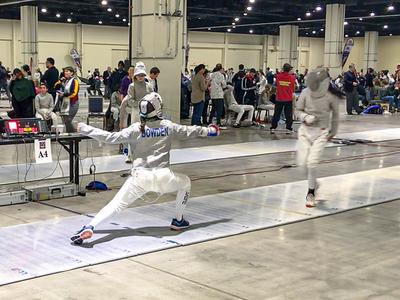 Hope Bowden of Orland, who studies fencing with John Krauss of the Down East School of Fencing, will compete in the Junior Olympic Fencing Championship, set for February 14-17 in Columbus, Ohio.

This will be a return trip for the George Stevens Academy junior, who started fencing in fifth grade, partly because she thought swordplay looked cool. There’s a lot more to fencing than slashing with a saber. Last year, she said, the competition was a lot faster, “so I got to see what I need to do to get up to their level with footwork.”

Bowden has made progress in that regard on the way to this year’s Junior Olympics, but she would advance faster if there were more saberists in her age group at the local level. To help draw more girls to the typically male-dominated sport, Bowden helped with the Down East School of Fencing’s January Sisterhood of the Sword event and was interviewed by a reporter from WABI TV.

“I wasn’t prepared for it,” Bowden said of the interview, but she believes the event has drawn more girls to the school.

She also competed recently in Capitol Clash in Maryland, where she learned “the level I kind of need to be at mentally, mentally prepared, to think ahead. If I parry, am I going to go for an attack? Or am I going to try to be the last one to parry, and then go.”

The other disciplines are foil and epée, and Bowden keeps her hand in all three disciplines. “It’s better to be able to fence everything so you can help out other people,” she said.

The sport isn’t just fun for Bowden. It has benefits that extend into daily life. The footwork and physicality of it, she said, have prepared her well for physical education class, but there are mental benefits as well. Fencing requires her to think ahead and ask herself “Am I prepared?” That practice helps her a lot with her studies and in the classroom, where it is easier for her to keep her composure in stressful situations.

Though there is no fencing club at GSA, she hopes that fencing can be added to the physical education offerings at the school.

Regardless, Bowden plans to continue fencing. After graduation in 2021, she would like to study marine ecology or marine biology at a college with a fencing program.

“And it’d be cool to go to the Olympics,” she said, “but I’d have to focus more on it, and I’m not sure if I can balance [fencing and college studies] at that level.”

For anyone interested in the sport, Bowden offers this advice: “Try it out, hopefully like it, and continue with it. It’s a great thing to get into, and I believe it’s one of the safest sports.”

For information on classes offered in the area, visit the Down East School of Fencing Facebook page.