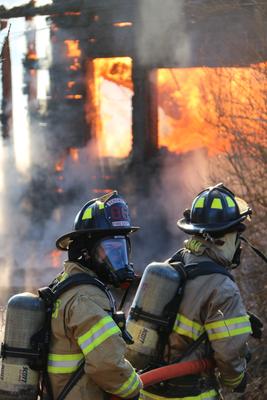 Sedgwick and Brooklin firefighters battle the flames at a February 3 house fire in Brooklin.

The tone went out at exactly 1:31 p.m. when neighbors reported smoke issuing from a residence at 627 Naskeag Road.

Within minutes, engines 1 and 2 from the Brooklin Fire Department arrived on scene to find a house engulfed in flames.

Engines from Deer Isle, Sedgwick and Blue Hill arrived shortly thereafter to help contain the blaze, which destroyed most of the structure before being extinguished.

As the event unfolded, the Penobscot, Surry and Stonington Fire Departments took over station coverage to ensure no lapse in response time in case other calls came in.

According to Brooklin’s assistant Fire Chief Tom Morris, the house was unoccupied at the time of fire, as the owner of the property, Paul Swanson, is currently in Florida.

“We were concerned at first,” said Morris, “but the neighbors helped with determining that no one was there.”

Morris specified that no casualties were reported.

The cause of the fire remains officially undetermined, “because there is too much damage to rule everything out,” said Morris.

However, Morris also noted that the State Fire Marshal found two power strips “daisy-chained” together in the area where the fire started. One of the power strips may also have been under a carpet, which can cause the strip to overheat, a common cause of fires Morris said.

As a result of the information available “we think it might have been electrical in nature,” said Morris.

Blue Hill Fire Department Battalion Chief Denny Roberston was sitting in a board of selectmen budget meeting when he heard the report. “I got the call and I came down,” he said, adding that the structure was fully consumed when he arrived.

The volunteer firefighters spent the whole afternoon beating back the flames. “It was four hours of exhausting work for the fire crews controlling the fire in one area, only to have it pop up in another—a firefighting version of whack-a-mole,” Morris said.

Firefighters finally cleared the area around 5 p.m., reopening Naskeag Road to non essential traffic at that time as well. 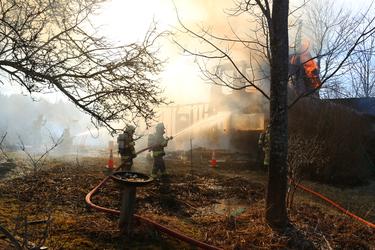 A house on Naskeag Road in Brooklin was fully consumed by fire by the time firefighters arrived. 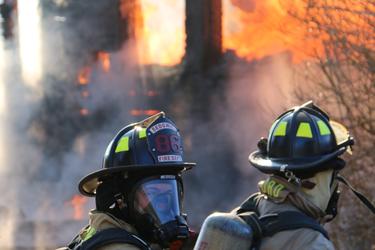 Sedgwick and Brooklin firefighters battle the flames at a February 3 house fire in Brooklin. 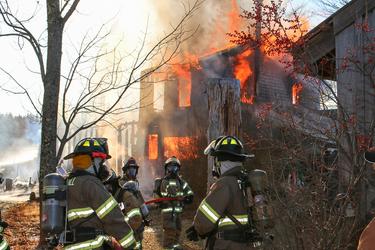 A Brooklin home was fully engulfed with flames when firefighters arrived on the scene. 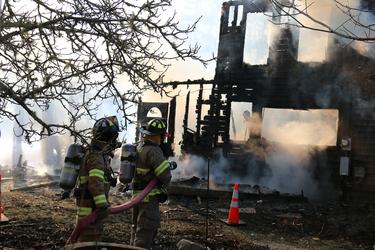