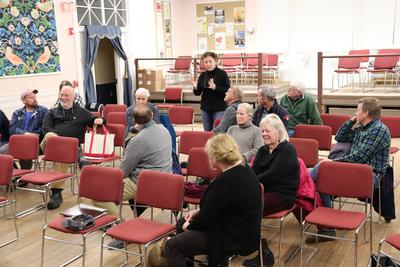 Marcia Henderson airs her concerns over a proposed GSA tuition increase at a public hearing February 19 at town hall.

In the most recent public gathering around a proposed George Stevens Academy $300 tuition hike to cover a projected budget shortfall, about 16 people attended a February 19 public hearing at the Blue Hill Town Hall. For Blue Hill voters, the question will be a referendum vote at town meeting come April. GSA was represented by Vice-Chairman of Trustees Sally Mills, finance committee co-chair Jim Markos—“We’re working tirelessly on what sources of revenue can assist us”— and trustees Deb Ludlow and Tyler Knowles.

“I think asking the town to vote to approve even $1 is a mistake,” resident Scott Miller said, “Because I think towns [and] people are going to vote against it. I would encourage you to withdraw your request for now and work with the towns.”

“Nobody wants [GSA] to go away,” Blue Hill Chairman of Selectmen Vaughn Leach said. “Everyone wants to work together. But in a two-month time frame?”

As in earlier public forums held by GSA and peninsula school boards, citizens took issue with the school’s perceived lack of transparency and lack of a plan.

“I think you’re way past the point of talking,” resident Marcia Henderson said. “There’s different ways of solving that shortfall. You seemed to have latched on to one.”

Henderson suggested the school up its marketing strategy to attract students. “When Bapst sends a bus to town and Ellsworth is talking about sending a bus here, something’s wrong,” she said. “This is an anchor institution of the community. I want to see it succeed but I don’t see the way you’re handling it succeed.”

George Stevens Academy first requested $2,700 above the state-set tuition rate of $11,759 in November 2019. After feedback from sending towns’ school boards concerning the timing of the request, trustees then proposed a three-year plan for the increase, with a $522 per student increase for 2020-21. Next, they lowered the first-year amount to $300, to be raised by raising the Insured Value Factor from 6 percent to about 9 percent per student, as allowed under state law.

At that time, the school also said that the full request is $2,000 per student, not $2,700, as the state tuition rises annually, as well.

Leach noted the numbers keep changing. “I’m confused what to tell my voters,” he said, while Selectman Ellen Best noted when other organizations ask the town for funding, they help illustrate their reasons with a detailed budget.

Mills said that the school can survive another year, on the $300 increase, as it works with the towns on the larger request.“I’d like us to learn from the things we got wrong, and we got plenty wrong, and move forward,” she said.