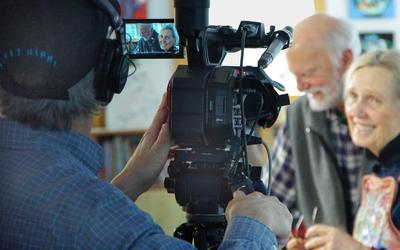 Richard Kane films Rob and Gail Shetterly in her studio.

Kane-Lewis Productions of Sedgwick recently announced that Bill Moyers, American journalist and political commentator, will be interviewed February 25 for their new documentary Truth Tellers. The film is expected to be released later this year.

This 19th film in the Maine Masters series on accomplished Maine artists, “Truth Tellers” will profile Robert Shetterly of Brooksville, the artist behind a portrait collection called “Americans Who Tell the Truth.” Shetterly began the project after 9/11 when he became disillusioned by what he deemed were false justifications for invading Iraq. His goal at the time was to paint portraits of 50 great American truth-tellers. The first was Walt Whitman, with a passage from Leaves of Grass inscribed in the dark background. Today, nearly two decades later, Shetterly has painted 250 portraits. In Shetterly’s view, more important than our right to free speech is our right to the truth, according to a news release from Kane-Lewis Productions.

As industry interest has grown in this project, two veteran filmmakers have been added to the production team to support the documentary reaching a broad audience via both traditional networks and streaming platforms. Joining filmmaker Richard Kane for the production team is former Senior Producer at National Geographic Judith Dwan Hallet and Director of Photography Bob Elfstrom, with many PBS and National Geographic documentaries (among others) to his credit. At the start of his career, Elfstrom worked as cameraman for Gimme Shelter, which chronicled the last weeks of the Rolling Stones’ 1969 U.S. tour which culminated in the disastrous Altamonte Concert.

The film crew travels to New York City February 25 to capture a conversation between Robert Shetterly and Bill Moyers, a vocal advocate of an independent press. Next they go to Charlottesville, Va., where 80 of Shetterly’s paintings will be exhibited at Thomas Jefferson’s Monticello, the University of Virginia and other locations around Charlottesville. The controversy around the statue of Robert E. Lee in that city will be one of the film’s topics. Zyahna Bryant, who at 15, petitioned to remove the statue for a school project, will be filmed in conversation with Shetterly at the statue. Other subjects who will participate in filmed events in Charlottesville include the Rev. Lennox Yearwood (Hip Hop Caucus), Kelsey Juliana, Diane Wilson, Sherri Mitchell, David Swanson, John Hunter and Bree Newsome. Other film locations include Washington, D.C., Montgomery, Ala., Vermont and Maine.

As a Maine Masters film under the fiscal sponsorship of the Union of Maine Visual Artists, Truth Tellers is a nonprofit endeavor. Private and foundation funding are being sought for production as well as for editing and distribution. For more information on the film, go to kanelewis.com.