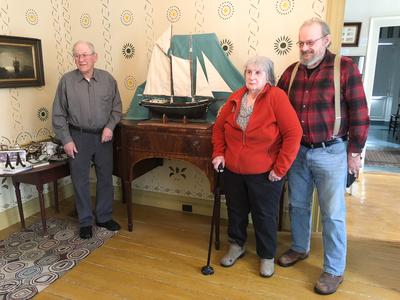 From left, Jerry Butler, Peggy Pert and Colby Pert stand next to model ship Minnie May at the Blue Hill Historical Society on Wednesday, February 19.

After a voyage spanning more than a century, model ship Minnie May reached its final berth at the Blue Hill Historical Society on Thursday, February 20.

Donated by local historian and past officer of the historical society Jerry Butler, Minnie May was meticulously restored by Colby and Peggy Pert of Sedgwick before being unveiled to the public.

According to Colby Pert, Minnie May is an example of a pond yacht, an accurately scaled model ship built as a children’s toy for sailing in small ponds and streams.

Hewn out of a single pine log, Minnie May was constructed around the turn of the 20th century by Everett Grindle as a gift to his nephew Charles Bacon. The ship coursed the waters in a small, dammed pond on a brook near the Bacon family house in East Blue Hill.

Charles, who was born in 1886, sailed his model ships there before eventually becoming a building contractor in Blue Hill, said Anne Durgin of the historical society.

After spending decades in an attic, Minnie May found a new home when Butler acquired the ship from the Bacon family in the 1960s. Realizing its historical significance and beautiful craftsmanship, he decided to donate it to the historical society, which contacted locally renowned model ship builder Colby Pert to do the restoration work needed to bring Minnie May back into its original condition.

Pert regularly contributes model ships to a raffle benefiting the Tree of Life food pantry and, by his own estimation, spent around 100 hours on Minnie May.

“I worked off and on around three weeks,” he said.

No details were spared in the restoration work, which included intricate restructuring of the rigging, a new anchor chain and fresh sails stitched by Peggy Pert.

Minnie May is permanently on view at the Blue Hill Historical Society located at 3 Water Street.