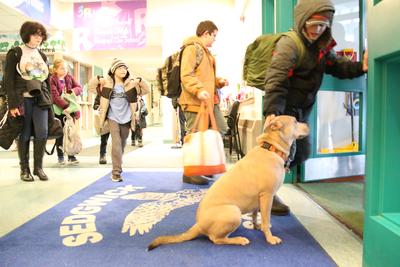 As they leave for the day, Sedgwick Elementary School students give a wave or pat to Elsa, who arrives each day with Principal Carla Magoon.

A new face showed up at Sedgwick Elementary School this fall and it was covered with fur.

Elsa—or Elsa Seltzer, as custodian Robert Violette likes to call her—is a 3-year-old, mixed-breed rescue dog who waits for students to arrive each morning and waits by the main entrance as 2:50 p.m. dismissal nears.

“Every day we stand in line and greet the kids,” Principal Carla Magoon said. “And at the end of the day, she watches them all leave.”

Elsa roams the hallways like she owns the place as passing students and staff bend down to scratch her head or look into her soft, brown eyes.

Magoon adopted Elsa from a German Shepherd rescue in Milford after watching videos of all the dogs in their pens.

“I got the dog and I didn’t know where to take her, so I took her to school,” Magoon said. “I knew she was real chill but she was just great.”

And chill Elsa is. Sometimes leashed, sometimes not, she may try to slip outside with a human’s departure, but she returns quickly at Magoon’s call, gives a few friendly sniffs to waiting parents and siblings, and sits down in her spot by the door.

In training to become a therapy dog, Elsa has also had a few obedience training sessions but Magoon said they weren’t really necessary “I think she was secretly trained before I got her,“ she said.

“Her biggest thing isn’t about how she is with people. [It’s] she doesn’t want me to leave,” Magoon said. 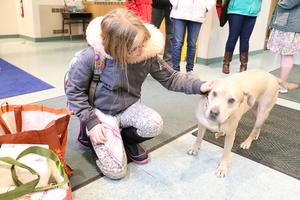 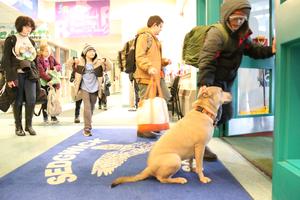 As they leave for the day, Sedgwick Elementary School students give a wave or pat to Elsa, who arrives each day with Principal Carla Magoon. 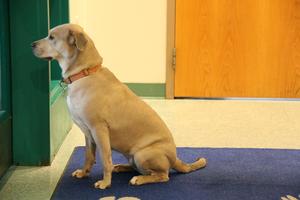 Sedgwick Elementary School’s unofficial greeter, Elsa, waits by the doors to greet students as they arrive and when they depart.