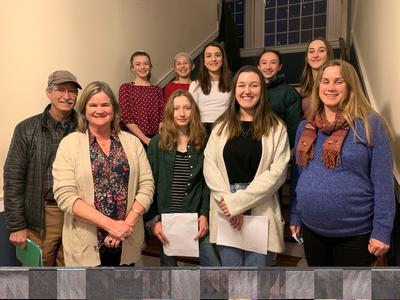 The group of students from George Stevens Academy and Blue Hill Consolidated School pose after their presentation to the board of selectmen.

What began as a guest presentation in science teacher Megan Flenniken’s class at George Stevens Academy culminated in a civics lesson at the Blue Hill Selectmen’s meeting on January 29.

With Wanda Gould and Cassidy Carlson, both seniors at GSA, leading the charge, 12 students representing GSA and Blue Hill Consolidated School presented the board of selectmen with a resolution from the Natural Resources Council of Maine aimed at recycling reform across the state.

After hearing from the students, selectmen voted to adopt the resolution, adding Blue Hill’s support to the long list of Maine towns that have already signed on.

According to Flenniken, the students were inspired by a presentation on recycling reform given by Randy Curtis, a member of the Natural Resources Council of Maine, in her “Maine Environment” class last fall.

“Wanda and Cassidy asked how they could participate in making this reform a reality, and the first step in the process was to act at a local level,” said Flenniken. “I think they were just waiting for a chance to be a part of something where they could make a positive impact.”

The students explained that endorsing the resolution would demonstrate solidarity with legislative efforts under way to impose an extended producer responsibility law, requiring producers of packaging materials consumed in Maine to reimburse cities and towns for recycling costs.

According to Curtis, Maine would be the first state to pass such a law, affirming the precedent set by Maine’s “bottle bill” in 1976, a similarly novel piece of legislation for its time.

The students outlined specific benefits the law would have for communities on the peninsula, such as saving money on disposal costs and reducing the amount of single use plastic packaging that ends up in a landfill or spread across the environment.

After the presentation, selectmen discussed the resolution with the students before voting to adopt it, with board of selectmen Chairman Vaughn Leach noting, “I prefer fish instead of plastic,” and commending the students for their dedication. “Don’t give up,” he added.

Asked what this success meant to her, Gould responded, “it’s empowering.” Gould said this is the first civil activity she’s ever been involved in, and she was proud to be contributing her efforts to affect change in a meaningful way.

After the meeting, Flenniken reflected on her students’ success, saying “I have a lot of hope for the world because of the change-makers I see in the next generation.”