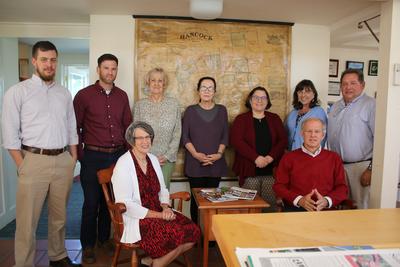 Time passes, bringing changes and, each year, a birthday. This year, the Merle B. Grindle Agency celebrates its 100th year of providing insurance to local residents and businesses.

Started in 1919 by Merle Grindle Sr., the first offices were located in Ellsworth, and South Blue Hill, where the Grindles summered, with the office inside their store, G.W. Grindle & Son. Grindle died in 1955, leaving his son, Merle B. Grindle Jr., as owner.

“[Merle Sr.] was primarily a life insurance person,” current owner Rob Clapp recalled. “His son, Merle B. Grindle Jr., although he sold life insurance, he was more into property and casualty.”

Clapp joined the agency April 23, 1979, at age 23, when Merle Grindle Jr. and Peter Dodge were agents. “My first day was ‘what did I just do?’ I had no particular desire to be in insurance,” Clapp said.” But 40 years later, I’m still here.”

Dodge and Clapp bought the agency in 1986, when Grindle retired, with Dodge as the principal owner, until his own retirement in 2015. After buying the Crocker Agency in Bucksport, Douglas W. Endicott Agency in Castine, and four other small agencies,“we’re 11 times bigger and nearly doubled the amount of employees,” Clapp said.

In the era of corporate insurance giants, MBG Agency is small. “We like our independence,” Clapp said. But, over time, technology has changed the insurance business.

“Everything was done by phone,” Clapp recalled. “We had manual and electric typewriters. Agents would dictate letters. Clerks typed and sent out policies.”

Now, in the internet age, big insurance companies can use Google Earth and similar technology to measure distances to a fire station, for example, when calculating rates. And there is other searchable information online at the tap of a finger.

“The insurance companies have access to so much information on everybody, it’s kind of scary,” Clapp said.

Agents used to spend time convincing people what they needed for protection, he continued. “Now, we spend our time talking to [insurance companies], trying to convince them that the people who want coverage should get it at a better price than they’re willing to offer.”

In the last 15 years, insurance scoring has been based on an person’s credit and claims history, whereas Clapp “used to be able to tell you in two minutes what your rates would be.”

Now, younger agents choose email over calling or even texts. But for Clapp: “I still feel the best response is by a human being, face to face.”

However they communicate, Clapp credits his staff for the agency’s longevity and success. “The quality of my employees is my biggest asset. And their loyalty,” he said. “My goal is to make this a great place to work.”

“When I first came, we typed every policy manually, three copies.” Smedal smiled, noting, “It’s much easier today. I love the modern technology. Even if Rob thinks it’s just the younger people, I love it.”

One thing that hasn’t changed is that insurance is about people.

“A surprising benefit is we get to meet a lot of people,” Clapp said. “I’ve had relationships with businesses for 35 years, going on 40. And that’s nice. I want to do the best I can for them. And they trust me.” 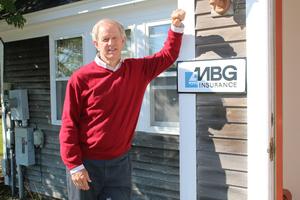 Rob Clapp, owner of Merle B. Grindle Agency, says a benefit of his job is meeting people. 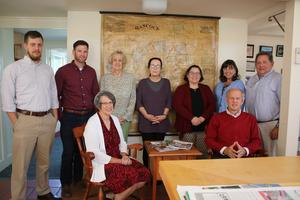