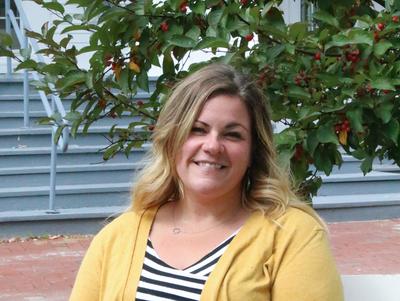 Shawna Ambrose was unanimously approved as town administrator for Blue Hill September 11 and, as the current deputy clerk, wrote the minutes relating to her new role as one of her last tasks in her former position.

“Shawna simply stood out,” Chairman of Selectmen Vaughn Leach stated in a press release. “She is smart, learns quickly, has great initiative and a great work ethic, and she knows our town.”

The selectmen were assisted in the candidate search and hiring by Maine Municipal Association’s David Barrett, who has 35 years experience working with Maine towns hiring town managers or administrators. Selectmen were unanimous in their praise of Barrett and the role he played.

Ambrose began as deputy clerk last September, after 11 years at Northern Light Blue Hill Hospital, where she moved from a certified nursing assistant to reception before moving into the clinical applications manager, and then clinical informatics manager positions.

Born and raised in Millinocket, Ambrose moved to Blue Hill in 2007, completed an associate’s degree in Humanities from University of Maine at Augusta and now plans to continue towards a bachelor’s degree in Public Administration.

She decided to apply for the town administrator position “on a whim” and informed the selectmen, who did not seem surprised, she said.

“Actually, after evaluating all the applications, [Ambrose] turned out to be an obvious choice,” Selectman Jim Dow stated. “Although this will be a step up for her, we think Shawna has what it takes to do a great job for our town.” Training opportunities through the Maine Municipal Association, and locating an experienced mentor, will be provided, he added.

While public administration may be new for Ambrose, she said she is ready.

“I’m invested in the town. My kids go to school here, my husband and I live here, I like working with the public,” she said. “I like troubleshooting issues and educating people on what’s happening.”

She added, “Being as transparent as possible is definitely important.”

She said her greatest challenge is in taking on a newly created position that will evolve, but that also worked in her favor.

“Given that this is a new position that we will need to shape going forward, we decided that it made sense to invest in a known person who is familiar with how our town government works and who has the capacity to grow with the position,” Selectman Ellen Best said.

“I know there will be hurdles in the way at times,” Ambrose said. “Earning the trust of the taxpayers of Blue Hill” is one of the challenges ahead.

“I’m most excited about jumping feet-first into this role and just being a face of Blue Hill that people can come to with concerns,” she said, “and just transitioning into this world of public administration.”

Ambrose begins her position Monday, September 16, on a one-year contract at a starting salary of $55,000. Her first order of business? Hiring a new deputy clerk.