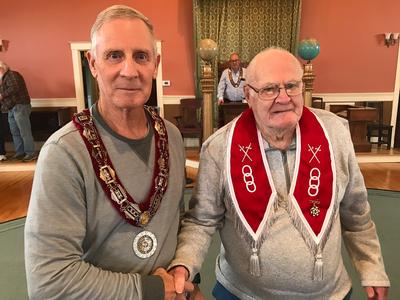 David Gulya, of Blue Hill Lodge #79, was recently installed as Grand Master of the Maine Independent Order of Odd Fellows, after serving one year as grand warden and one as deputy grand master. All are elected positions.

“I steer the ship,” Gulya said of his grand master role. “We have 22 lodges in the state, from Houlton to Kennebec.”

The order’s mission, Gulya stated, is to improve and evaluate the character of humankind by promoting the principles of friendship, love and truth, and to help make the world a better place by aiding each other, those less fortunate, youth and the elderly.

An Odd Fellow for decades, Gulya said most members who join stay for life. “I just pinned a 70-year jewel on a fellow,” he said.

While the overarching goals of the IOOF are constant throughout Maine, each lodge “has the freedom of doing their own projects,” Gulya said.

In Blue Hill, Odd Fellows have taken on sprucing up the playground in the town park and donating to the Tree of Life food pantry, after-school programs, and the Christmas Angels program. They also give out the annual Duane B. Gray Memorial Book Award, which helps pay for textbooks for local students attending college.

Across the peninsula and island, Odd Fellows in District 6—Blue Hill, Brooklin, Brooksville and Stonington—volunteer with Meals for Me programs, heating assistance and veterans’ support.

Nationally, the IOOF runs programs such as Living Legacy, which has planted over 8 million trees, and has donated millions of dollars to education, medical research, housing, and the U.N. Pilgrimage Youth program.

“We’re kind of quiet about it,” Gulya said. “We don’t have the money the Masons or Shriners do.”

The first IOOF in Maine formed in 1819. As recently as 1980, there were about 132 lodges throughout the state, a number that has dwindled to 22, Gulya said. The Odd Fellows were also the first fraternal organization to allow women to join; they run the sister organization, The Rebekahs.

Despite all the good works and camaraderie spread by the local Odd Fellows, the group does tend to operate below the radar.

“At the memorial [for Odd Fellow Gordon Carter], a life-long resident of Blue Hill asked where the Odd Fellows Hall was,” Gulya commented. (It’s on Main Street, across from the Pleasant Street intersection.)

The grand master term runs for one year, after which Gulya will spend two more years as grand representative.