Blue Hill
Originally published in The Weekly Packet, October 31, 2019
Local Little League program asks for help
AA field, used by many, not up to league standards 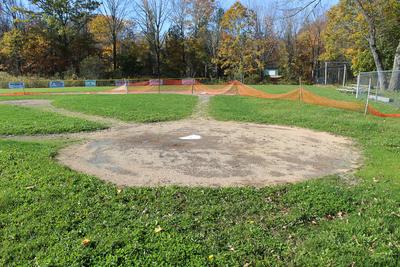 The pitcher’s mound at the baseball diamond at the AA Field shows standing water and an uneven, patchy infield in this photo taken October 26.

“Every spring volunteers show up to try to make the field playable by pulling weeds, dragging the dirt, cutting the grass, and cleaning the public toilets. By the time the season ended and it was time for tournament games, Little League officials declared our field unfit for play. The unevenness of the ground made play dangerous and the lack of dugouts was considered unsafe,” the board wrote selectmen.

The volunteer group—Adam Gray, Elizabeth Young, Corey Schildroth, Jonathan Smallidge and Robert Sullivan—hired Lawns in Order, LLC, to bring the infield up to Little league standards, at a cost of $3,385, of which they paid $1,500 to date. They requested the town pay the balance, and budget for dugouts as well as annual field maintenance.

“There hasn’t been a lot of maintenance done on the field and it’s gotten away from us,” Smallidge said.

Youth baseball has a long tradition of parent voluntarism, but part of the issue, Smallidge said, is that the town and high school soccer programs use the field, the rest room/concession building and the garbage can, and then walk away. GSA previously mowed the field as quid pro quo for its use by the JV soccer team but stopped two years ago, saying they no longer used the field, which Smallidge said is not the case. Smallidge said he walked in on the track team using the infield for shot put and discus practice. A casual Friday night adult softball game also gets played, in addition to the four levels of Little league teams.

“There has to be some collaboration between all these entities,” Selectman Vaughn Leach said.

While Little League sponsors pay $300 annually to hang signs along the fence and players pay a league fee, that covers only the cost of uniforms and league insurance. Coaches volunteer their time. The town has previously funded the Little League program, at about $1,000 a year, but not in the past couple years, Smallidge said. The group is asking for $4,200 for annual field maintenance and about $6,000 for dugouts, an item selectmen said was better suited for fundraising or a grant.

Schildroth pointed out the amount of fundraising and volunteer time the Little League supporters already give.