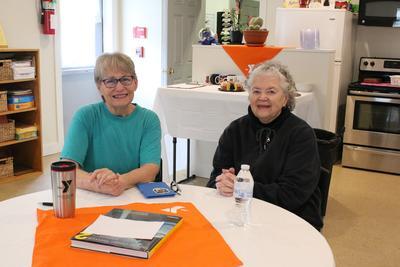 Mary Crowley, right, is the head volunteer for the new Blue Hill YMCA senior center, along with other volunteers, like Crowley’s friend Janet, pictured in photo.

The Blue Hill YMCA has found a way to utilize the space left vacant when the Blue Hill Childcare Center closed in September. That space has now been converted into a senior center for senior YMCA members and the general senior population to gather for coffee, puzzles, board games and socializing five days a week.

The center opened on November 3, during which time several people showed up to take part in what is hoped to be something that will expand to offer “more and more” to the seniors in the Blue Hill area, according to head volunteer Mary Crowley.

“We’re very excited about this,” said Crowley, a Blue Hill YMCA volunteer and senior member. “We want to maybe have a day for knitting, we’ll get a Christmas tree for people to decorate, we’re hosting a turkey dinner for Thanksgiving. There are a lot of single seniors who now have a place to come more than once a week.”

Crowley, other volunteers and YMCA staff have decorated the room with tables, plants and centerpieces, as well as a big screen television, to make the space look inviting.

Joy Bragdon, a trainer and staff member at the Blue Hill YMCA, said that running the senior center is at low cost to Down East Family YMCA, which operates the Blue Hill location, due largely to the volunteers who have taken on the task of running it.

“[The YMCA] pays for things like coffee and creamer but the members bring in food to share, and we’ve had things donated,” she said. “The only other things we might have to pay for are crafts and that sort of thing.”

With so many senior members using the fitness center portion of the building, Bragdon said “it made sense” to expand into the empty room to give them another space to spend their time after their workouts.

“We have senior classes three days a week and have noticed that they come in early and socialize. Sometimes you can’t even get through the door,” said Bragdon. “They’re lovely, so why not use this room. They need it too.”

“Our volunteers have been incredible,” Bradgon added. “The staff pokes their heads in to check in every so often, but mostly, this is done by our amazing volunteers.”

A third room in the building has been turned into a recreation room, with items such as a ping-pong table and corn hole. This space can be utilized by the senior members during senior center hours, but it is also the goal to develop an after school program for area children to drop by and play games while waiting for their parents.

“This has the potential to be something truly great for the community,” said Crowley. “We really need this, especially with winter here now. It’s important to be able to get out and have a place to go.”

The senior center is open from 9 a.m. to 12 p.m. Monday through Friday.