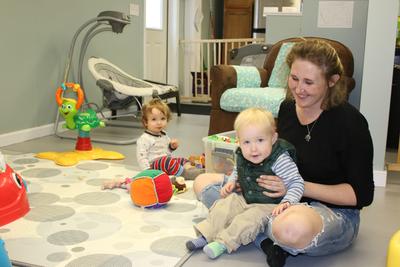 Nicole Johnson opened Golden Sun Childcare in Blue Hill and Sargentville December 5. Above, she plays with her son, Jackson Higgins, and Daniel Gutcheon.

While the unexpected closure of the Blue Hill YMCA Daycare stunned parents and left them scrambling to find child care in September, one former staff member stepped right up and fast-tracked a new one.

Golden Sun Childcare opened two locations Thursday, December 5, one in Blue Hill, at 8 South Street, and one at 106 Caterpillar Hill Road in Sedgwick, across from Eggemoggin Country Store.

Opening a childcare center in under three months is about four times faster than the average length of time it takes. But Nicole Johnson had help, from the Department of Health and Human Services, which helped her quickly get the facilities inspected and licensed, and the over 300 community members, from as far as Trenton, who organized fundraisers, carpentered, painted, donated, collected returnable bottles and cans, and much more.

Johnson opened Golden Sun in two locations because the licensing process for facilities caring for more than 12 children is considerably more complicated, she said, and opening quickly was important for local families.

“If there’s enough interest, we can expand up to 40 kids in Sargentville,” Johnson said, although new licensing will first be needed.

Opening Golden Sun allows Johnson to continue working with children, which has been her on-and-off mainstay for 14 years, including working with Downeast Horizons and DHHS in reuniting families.

“I started as a camp counselor at Scamp Camp at Nichols [Day Camps]and fell in love with it,” she said. “I’d go away [from working with children] for a while and always came back.”

“I hope this is something the community can rely on in the long run and a place people will really want to bring their kids,” Johnson said. “If there’s ever an issue, I’ll definitely let the public know.”