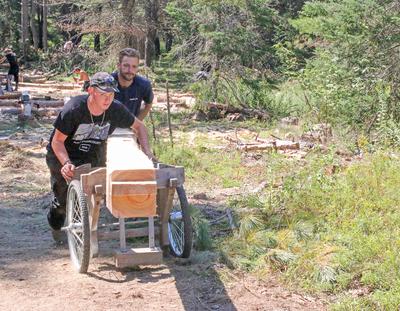 Crew members with Carpenters Without Borders haul wood with a wagon by hand, instead of with a motorized tractor.

For Joshua Klein, working with wood is more than a hobby or career; it is a passion.

Klein used that passion to create Mortise and Tenon Magazine three years ago, and what started out as a side project to his 18th and 19th centuries furniture restoration company has launched him into the living rooms of similar minded people across the country.

Most recently, Klein moved his workshop from a small building in Brooklin to a much larger one in Sedgwick, which he and a friend built and put up without the use of battery or motor-operated tools. The new workshop sits on acres of land, which Klein decided he wanted to build a wood shop and blacksmith shop on.

It was this affection and dedication to the exclusive use of tools from before the 21st Century that Will Lisak, a friend of Klein’s, used to spark the interest of Carpenters Without Borders, a European group dedicated to the same practices as Klein, but on a much larger scale of building houses and buildings instead of furniture.

“It was a gift,” said Klein. “They were looking for their next project, but nothing seemed to fit with their mission. Will told them my idea to build the wood shop and the blacksmith shop and they were on board. I was like ‘what, really?’”

That was in February, and on August 23, a crew of over 30 men and woman from Poland, France, Estonia, Finland, England, Scotland and the United States converged onto Klein’s property and immediately got to work.

“When they got here I told them they could take it easy for the day, since they had all been traveling for almost 20 hours and feeling jet-lagged. They didn’t take it easy. They grabbed their axes and saws and got right to work,” said Klein.

Carpenters Without Borders is a volunteer group that works on projects throughout the year, typically in places that need help after natural disaster or where the resources just are not there.

From post, to beam, to doors and everything in between, the wood for Klein’s project has all been sourced locally, either from Klein’s property or from acquaintances in the area. Wood sourced off of Klein’s property was all brought in dragged by a horse, and the trees cut in Sedgwick were all harvested by saw or ax.

“You won’t find a drill or chainsaw here,” said Klein. “These guys are very committed to their traditions of building with technology from the early centuries.”

Klein works in similar traditions, but one of the things he said has been most interesting about spending time with the Carpenters Without Borders has been the cultural exchange that has gone on throughout the process.

“They are really interested in learning the American traditions of using these tools; whereas, I have been able to learn their ways, which are vastly different than ours,” he said. “It’s one of those things that goes far beyond just the project we’re doing.”

That cultural exchange has also taken place in the kitchen, where Klein’s wife Julie has been cooking with two of the wives of the workers, who hail from France and Poland.

“From the very beginning we were like ‘how do we make this the best experience for these people, and for us,’” said Klein. “We wanted to get the very best food, so we sourced our food exclusively from local farmers, we raised our own chickens. Even the sugar and those things comes from the [Blue Hill] Coop. All of the bread baking has been done in the brick oven at Tinder Hearth. It’s been such a learning experience each and every day.”

Though the project is grueling and requires hard labor for several hours a day, Klein said the Carpenters Without Borders crew sees this trip as a vacation.

“They aren’t making any money off this, they all have day jobs. But this is their vacation, this is their time off. It’s a chance for them to do something different,” he said.

The work will continue until August 31, when the frame of the workshop will go up in its entirety. Half the building will be the wood shop, closed off with flooring, while the other half will be an operational blacksmith shop, with dirt and tiled floor able to withstand the heat.

“It’s so exciting, I just feel so thankful and kind of in awe that this is happening for us,” said Klein. “It’s one of those pinch me moments, you know?” 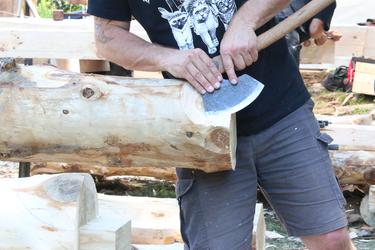 A crew member with Carpenters Without Borders uses a centuries old ax to carve out the end of a wood beam. 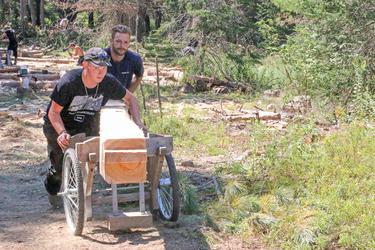 Crew members with Carpenters Without Borders haul wood with a wagon by hand, instead of with a motorized tractor. 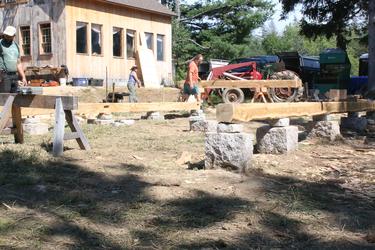 When the project is completed, this will be the site of Joshua Klein’s new wood shop and blacksmith shop. 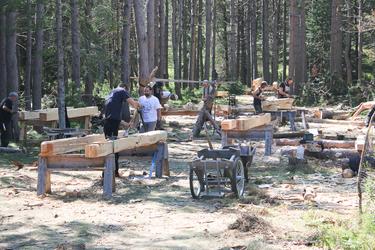 Volunteers with Carpenters Without Borders work diligently to harvest and haul wood that is then used for beams and posts, among other things.