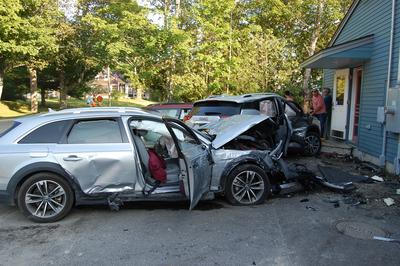 A multiple vehicle accident at the Brooklin General Store on August 12 left damages to several vehicles and to the exterior of the store.

A multiple-vehicle accident on August 12 left seven people injured and damage to the exterior of the Brooklin General Store. Everyone escaped with non-life threatening injuries.

According to the Hancock County Sheriff’s Office, John M. Thomas, 81, of Buffalo, N.Y., suffered a medical event when he fainted at the wheel of his vehicle and hit six cars around 4:40 p.m. Thomas had three passengers in his vehicle at the time of the crash.

Thomas’s car slammed into two vehicles in the lane he was traveling in, before being rerouted into the parking lot of the Brooklin General Store, where he hit a GMC Terrain. This collision caused a chain reaction, and the Terrain was pushed into two parked cars, which caused damage to the store’s back porch. Thomas’s car hit a concrete barrier and the store’s ice cooler before coming to a stop. One of the vehicles had three passengers, according to the report.

Brooklin General Store owner Lorinda Toscas arrived on the scene shortly after the event occurred, and said that her staff immediately called for emergency assistance, and that though it was an “extremely startling and stressful situation,” she was happy with the way they responded and were willing to help until services arrived.

Toscas said she is not sure how much the damages are going to cost to repair, at this point, but there was damage to the wall of the building, the main electrical panel, the side porch and the ice storage box. Eaton Builders and Haskell electric arrived the following morning and worked with Toscas to address the situation, she said.

“We owe a big thank you to the Brooklin Fire Department. Their prompt arrival and professional support reaffirms how fortunate our town is to have this great team of volunteers available,” said Toscas.

The investigation is ongoing, and no arrests had been made as of Wednesday, August 14, according to the sheriff’s office.