Stonington
Web exclusive, August 25, 2016
Authors Among Us
Penn Rhodeen’s Peacerunner tells how one man can make a difference 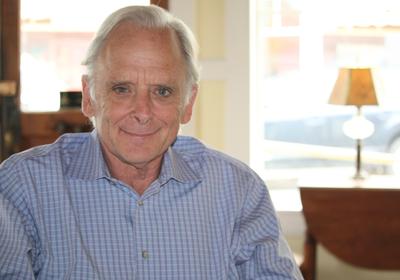 Penn Rhodeen, a long-time Stonington summer resident, will speak on his book, Peacerunner, at the Blue Hill Library on August 31, at 7 p.m.

Sometimes a writer searches for a good story to tell and other times the story comes to him. Penn Rhodeen, a longtime Stonington summer resident whose early desire to write had been shelved for decades, published Peacerunner in 2016, a true story about one man’s drive to help bring peace to the centuries-old conflict between Britain and Northern Ireland, opening a window into “the Troubles,” as the conflict was called, and how it was resolved.

Rhodeen will speak at the Blue Hill Library on August 31, at 7 p.m., following well-attended stops at the Stonington Library in July and the Sunset Congregational Church earlier this summer.

“I felt it was a really important story that hadn’t gotten its due,” he said in a recent interview, and “is relevant to the question[s] ‘What is politics good for? Can you do good with politics?’”

The difference between the story told in Peacerunner and the usual political tale is that the story’s hero, Bruce Morrison, operated outside official avenues. A New Haven-based attorney and ex-Congressman, Morrison was able to leverage the high regard the Irish people had for him through his work as a Congressman, where he chaired the House Immigration Subcommittee.

“[Morrison’s] credibility in Ireland came from his including 50,000 visas for the Irish in his 1990 immigration bill that became known as Morrison Visas,” Rhodeen explained, “and led the Irish to say that he walked on water.”

Rhodeen’s own credibility in writing Peacerunner springs from a friendship with Morrison that dates back to their shared time in the New Haven Legal Assistance Association. At that time, Morrison was still a law student, and Rhodeen was a staff lawyer with a longstanding, proactive interest in United States politics.

“Bruce cornered me in a stairwell on a Legal Aid matter,” Rhodeen recalled. “I walked away thinking perhaps I had met the most brilliant lawyer ever.”

What made Morrison’s successful efforts between the two sides in Northern Ireland and leaders in Ireland, Britain and the U.S. a game-changer was how it helped create a new role for the United States as a peace broker, Rhodeen said.

“It established the U.S. as an honest broker, available to everyone,” he said, while also signaling “a huge departure for American participation” in the politics of Northern Ireland. For the first time, Americans were pursuing a policy independent from Britain and were connecting with both sides of the conflict, not just the Catholics that Irish Americans traditionally focused on.

While over 20 years ago, some may remember when Gerry Adams, president of the Irish Republican Army’s political arm, Sinn Féin, was granted a visa in 1994 to come to New York for a conference, and the controversy and fanfare that accompanied it because of Sinn Féin’s label as a terrorist organization by the American, Irish and British governments.

Morrison exhibited a political prowess by operating outside any U.S. officially sanctioned role, and using private funds, to work with Sinn Féin towards first a ceasefire and then, ultimately, negotiations chaired by George Mitchell that led to the 1998 Good Friday Agreement that ended the warfare.

“The brilliance of what Morrison did was to perfectly create a whole context to make Clinton [act],” Rhodeen said.

Former President Bill Clinton wrote the foreword for Peacerunner, and Rhodeen used interviewed and published statements from Northern Ireland, British, Irish and American politicians and officials to illustrate the story, which he began writing five years ago, after speaking with Morrison at a New Haven event.

“He was talking about writing his memoirs,” Rhodeen said. “It was evident he wasn’t going to do them. Finally, I just decided, I’ll tell the story.”

A reminder from a friend that Rhodeen had once said he wanted to write the “great American novel,” helped the wheels begin to turn, even though Rhodeen said he didn’t remember ever saying that.

However, he had written editorials and op-ed pieces on politics and current events, published in major newspapers, including the New York Times. And while he works to publicize Peacerunner, Rhodeen is already “reaching out” to people for a second book, he said, on a Texas man executed based on “arson forensics” evidence that did not hold up to close inspection by a top arson scientist. Rhodeen said he is especially interested in the ways the man’s socio-economic standing, and judgments on his behavior after the fire, influenced the guilty verdict. The story has already been profiled on the PBS show Frontline and in New Yorker magazine.

The story speaks to Rhodeen’s “lawyer side,” while echoing the operatic tragedy of “a nobody who gets caught up in a inexorable, terrible destiny.”

As he continues, his passion becomes evident. “People are infinite in their willingness to judge people by behavior in extreme circumstances they know nothing about,” he said. “I think of The Crucible. I think of The Stranger…How tough it is to be on the margins, even though we’re less class-based as a culture…I’m always moved by what can happen to people when things beyond their control dictate the course of their life.”

Reflecting on his finished book and the one just under way, Rhodeen noted, “Peacerunner is different; it’s a hopeful story about people changing what always seemed to be their destiny. This new story is about a different kind of hope: although we can’t alter its cruel outcome, it can help us see how to prevent such a tragedy from ever happening again.”