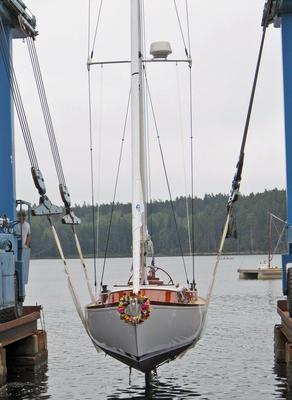 The day was overcast, but spirits were bright last week as the crew at Brooklin Boat Yard launched Iris, a new sailboat built on the Eggemoggin 47 design.

In a brief, pre-launch speech, Iris’ new owner, Andrew Barrett, thanked the crew for the care and passion they put into the project and noted that the boatyard had produced what he had been promised, on time and at the stated cost.

“That’s the first time I’ve had that happen,” he said.

Barrett said that Iris was the “largest, fastest and most beautiful” of the many boats he had owned during his life, noting that her name comes from Greek mythology. Iris was the daughter of a sea god and became a messenger of the gods. He said he hoped Iris will bring “pleasure and safe passing to all who sail with you.”

Then, swinging with both hands, Barrett’s daughter, Grace, christened Iris with the traditional bottle of bubbly and the Travel-lift eased Iris over the water and into the waters of Center Harbor. After a quick systems check and an initial inspection by the owner, Iris drifted away from the dock for her maiden voyage.

Iris is the fourth boat built on the boatyard’s Eggemoggin 47 hull, a Bob Stevens design, and the third built after the original was redesigned.

The first boat off the hull was built 11 years ago. A few years ago, however, Patrick Wilmerding approached the yard and asked if it was possible to make a few changes, according to Brooklin Boat Yard owner Steve White.

“He brought in Jim Taylor a designer from Marblehead, Mass., who redesigned the keel and the rigging,” White said. “We redesigned the cockpit. Basically, it’s a different boat now.”

The Eggemoggin 47 is a fast boat, but its key feature, White said, is ease of handling. It’s designed to be easily sailed by one or two people. Everything can be done from the cockpit.

The boatyard launched Lark, the first of the redesigned 47s last year. Lark, like the other three sister vessels, is home-ported in Maine and her presence during the last sailing season generated some interest, White said.

“He had a lot of fun sailing her and that stirred up some interest among other clients,” he said.

During the winter, crews worked on Iris and another 47-footer, Lynette, which was launched in mid-June, followed in short order by Iris which was launched last week. Lark, and owner Wilmerding, sailed in for the launch and briefly, the two sailboats were tied up stern-to-stern at the boatyard dock.

The boats, White said, are very similar, any differences reflecting how the owners plan to use them. Iris, for example, was built primarily as a daysailer and so has fewer accommodations with only two bunks below and no real galley.

With Lynnette and Iris now in the water, crews at the boatyard are focused on finishing up work on a new 70-foot sloop which will be launched in August. They also have begun work on a repair project on a 1948 John Harker-designed power boat for the Antique Boat Museum in Clayton, N.Y. The boatyard will replace the bottom of the 48-foot, three-cockpit boat and reinstall restored V-12, supercharged Packard engines.

The crews also are gearing up to start work on two new projects, a 49-footer and a 72-footer. The lumber has been ordered and all the lofting is done. Work should begin in earnest in August, White said. 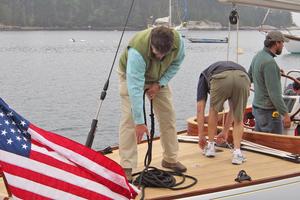 Owner Andrew Barrett handles the mooring lines as Iris, his new Eggemoggin 47, heads away from the Brooklin Boat Yard dock on its maiden voyage. Iris was launched last week. 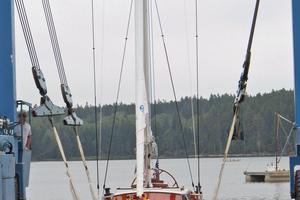