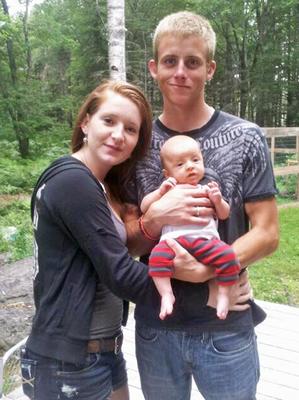 Brooklin mother Alorah Gellerson’s decision to feed her weeks-old infant son a homemade, goat-milk based formula has launched a Department of Health and Human Services investigation, along with threats from DHHS that they would remove baby Carson from her care.

When asked by a WIC (Women, Infants and Children) health worker, at a scheduled checkup, how breastfeeding her son Carson was going, Gellerson was honest in her answer.

Breastfeeding had proved difficult for her baby. He had been born premature, weighing 4 lbs., 10 oz., and kept in the hospital for observation, where Gellerson could not breast feed. After, he was only comfortable, and took in enough milk, from a bottle. Within a few weeks, pumping her milk did not provide enough for Carson’s needs.

“For a seventeen-year-old girl to even commit to breast feed is very good. There was a lot of tears and depression that she couldn’t follow through. She was quite devastated,” said Gellerson’s mother, Tania Allen.

So Gellerson told the WIC staff she was feeding Carson goat milk supplemented with liquid infant multivitamins, probiotic powder and other natural ingredients from a recipe Allen had researched online.

“She didn’t say where she was from, and asked to come in,” said Gellerson.

After Leighton identified herself, Gellerson said she “started being very rude and demanded that I go to the hospital with her, and that if I didn’t, she would take Carson herself.”

Gellerson hadn’t returned Dr. Hoffman’s phone calls because Hoffman was pressuring vaccinations for Carson, which Gellerson was against, and wanted Gellerson to bring him in for frequent checkups.

“We don’t do that in our family,” said Allen. “We only believe in taking babies, people [to the doctor] when you have concerns, are injured or sick.”

Allen said that Hoffman had been “nicely” told that Gellerson would bring Carson in if there were a problem.

Gellerson had started Carson on the goat milk formula after her mother, Tania Allen, had found that store-bought formulas all, including organic ones, contained some form of genetically engineered material, including the synthetic nutritional oils DHA and ARA that have resulted in reports of infant illness.

“There was nothing short of buying from Europe,” said Allen. “But what did people do years ago? They used goat milk.”

Allen, who runs Everyday Miracles Farm in Brooklin, used milk from her own goat, and also added flax seed oil, coconut oil, brown rice syrup and celery juice. She developed the recipe with help from online resources, including the nonprofit Weston A. Price Foundation, which provides nutrition education based on “healthy, traditional diets,” according to its website.

After the DHHS visit, Gellerson and Allen took Carson to their family doctor, Dr. Brandt Rice of Coastal Family Medicine in Blue Hill.

“We thought [he] would be a good [medical] opinion,” said Allen. “He saw nothing wrong with the baby in a physical examination.”

Rice’s report, which he sent to DHHS and Gellerson provided to The Packet, stated that Carson’s physical exam “was overall very reassuring,” with recommendations of more scheduled feeding times and referrals to MaineCare physicians who “would be more attentive to your needs.” He also was “interested in [Carson’s] liver and kidney function, and screening for anemia, among other things, but only if these evaluations have not been done recently.”

Rice also “highly recommend[ed]” that [Gellerson] not use any formula/goat milk that would require pasteurization,” as that would destroy nutritional value and create the potential for infection if not performed properly.

Allen said the DHHS was not satisfied with Rice’s report and returned to Gellerson’s home on August 5, stating she must admit Carson to Eastern Maine Medical Center in Bangor before 5 p.m. because “he was seriously ill. We were told if we did not comply…they would come and take the baby.”

Gellerson, Allen and Carson were met at EMMC by a team of four doctors, including a pediatric specialist, said Allen, where Carson was given a physical exam. According to Allen, the specialist “seemed flabbergasted” why they were at the hospital and said if Carson’s blood work was normal, they were free to go.

But before the blood work was back, they were told that Dr. Lawrence Ricci, whom DHHS uses in child abuse and neglect cases, had overruled that decision.

According to Allen, Ricci had reviewed their goat milk recipe and decided that “this baby was seriously ill.” Ricci is affiliated with the nonprofit Spurwink organization, which provides mental and educational services and seeks to “empower individuals, with their families and communities, to realize their optimal potential,” according to its website. Ricci and the DHHS office did not return phone calls from The Packet.

Gellerson and Carson were ordered to spend the night at EMMC for observation, which entailed recording how much he drank and weighing his diapers. They were released the next day, with follow-up appointments with Dr. Hoffman—and with Dr. Ricci at the Spurwink Child Abuse Clinic office in Bangor.

“It’s been really scary, because I thought I might lose him over what I was feeding him. I was only trying to do the best thing because breast feeding wouldn’t work,” said Gellerson.

She said she started feeding Carson store-bought formula after the DHHS visit, although she was never ordered to go off goat milk, and it made Carson sick.

“He was constipated, spitting up,” she said.

Gellerson urged people to come to a planned protest before Carson’s appointment with Ricci on September 5 at 12 p.m., in front of the Webber Medical Building at EMMC.