Plans to build a pair of tennis courts at the Brooklin school grounds took another step forward at the annual town meeting on Saturday, April 6.

Voters agreed to authorize the town’s board of selectmen to accept donations for the project and also authorized the Tennis Courts for Brooklin Committee to oversee construction of the courts under the guidance of the selectmen.

In response to questions, committee member Jon Hopkins explained that the plan calls for the two outdoor courts to be built on school property just across the drive from the main entrance and just beyond the existing walkway. He acknowledged that part of that area has been identified as wetlands, but said the Maine Department of Environmental Protection already has approved the site for construction.

The budget for the tennis court project is $105,000 and Hopkins said the committee already has pledges of about $80,000 leaving another $25,000 to be raised. The action at town meeting establishes the tennis court committee as a nonprofit entity and makes donations to the project tax-exempt.

Hopkins said the courts will be all-weather courts, built of asphalt with a coating of acrylic, similar to the courts used at George Stevens Academy and Deer Isle-Stonington High School.

The courts, he said, are expected to need to be refurbished within five to seven years and the project budget includes a maintenance fund of $10,000 that should cover those costs for the first 10 years that the courts are in use. The outdoor courts will not have any lighting.

The project, he said, would enhance the quality of life in the town and would provide the school children another option for physical activity.

“We’d like to see the school kids get started in a life-long sport,” he said.

The budget also includes funds to purchase appropriate size tennis equipment for the school. The school will have priority on the use of the courts in the fall and the spring, Hopkins said.

“The only priority is for the school athletic program,” he said. “We’re working with the school on the times that [the courts] will be reserved in the fall and the spring.”

The committee does not anticipate sign-up sheets for the public use of the courts, but will ask players to limit their playing time if there are people waiting, he said.

One woman asked if there could be a sign asking tennis players not to swear when they miss a shot. Although her question drew chuckles from the town meeting crowd, Hopkins said that it was a serious question especially since the courts will be located on school grounds. He said the committee is working on a number of regulations to ensure that the courts are used respectfully.

With enough pledges in hand and the authorization from the town, the committee expects to begin work on the courts this summer. The work should be completed by mid-August.

With Saturday’s vote, donations to the project can be sent directly to the town office.

Voters whipped through the school budget articles with little discussion and no dissention. The only change to the school warrant articles came from school board chairman Mike Sealander. The amount of additional local funds beyond those determined by the Essential Programs and Services formula increased significantly this year. But because of a miscalculation, the amount listed in the warrant was about $81,000 higher than it was supposed to be.

Voters also agreed to ask the state Legislature to support the creation of an amendment to the U.S. Constitution that would effectively limit the influence of “big money” in elections.

Peter Sly, who drafted the local warrant article, said the effort to regulate fundraising and spending in elections was spurred by the 2010 Supreme Court Citizens United decision.

“A lot of people did not like that decision, and it is not a partisan issue,” he said. “There is a movement around the country to try to deal with it.”

There already are seven national efforts working toward some kind of limits on election spending, and 10 states and 30 Maine towns already have adopted language similar to that proposed in Brooklin.

Although most residents were sympathetic to the cause, Liz Walker raised a concern about the wording. The original warrant article asked if the town should ask the Legislature “to support an amendment to the U.S. Constitution…” Walker said the wording of the amendment was not included in the warrant article and she assumed that it had not been written yet.

“How can we support something that’s not written yet?” she asked.

Holbrook Williams suggested that the lack of wording for an amendment gave the Legislature the option of developing the wording through the “democratic, intellectual process.”

Others spoke along the same vein, but eventually the wording of the warrant article was changed, asking the Legislature to support the “creation” of a Constitutional amendment.

The article passed by a substantial margin, but not without opposition.

One man suggested that town meeting was not the proper forum for such an action.

“These people should be writing petitions and writing letters,” he said. “This is not something the town should be doing.”

Another, who said he was not necessarily opposed to the article, questioned the real impact of big money in elections.

“Look at the elections last fall,” he said. “A tremendous amount of money was spent on it by the people who lost.”

Voters approved all of the town budget items totaling $753,375, a sharp decrease from last year’s budget which included $300,000 for the renovations at the town office building.

Voters approved the transfer of $41,618 to complete the payment on the renovation project. That article drew criticism from resident Giffy Full, not for the price tag, but for the handicapped accessible ramp that was added to the front of the building.

“In my opinion, that [ramp] is an affront to the building and to the veterans’ memorial,” he said. “You’ve built a big eyesore on the place and I don’t understand why you would do such a thing. I think that was extremely poorly thought out.”

Moderator George Eaton reminded Full and other residents that the article dealt only with the funding.

At the request of Ellen Booraem, representing the Brooklin Youth Corps, voters reduced the allocation for that group from $7,500 to $3,500. Booraem explained that the higher figure anticipated a need for extra staff for the program this summer. She said the program would have only one van and one coordinator this summer and so did not need the additional funds.

In municipal elections on Friday, all of the candidates were running unopposed.

Selectman Michael Roy received 63 votes, Tax Collector Sharon Freethey received 66 votes, Road Commissioner Neil Allen received 64 votes. The only announced candidate for a three-year term on the school board, Stacia Nevin, received 65 votes. There were a number of write-ins for the other open seat on the school board. Wade Dow received 7 votes, three others received two votes each and even more got just one vote.

Moderator Eaton said the results of that race are still to be determined so there remains an open seat on the school board. 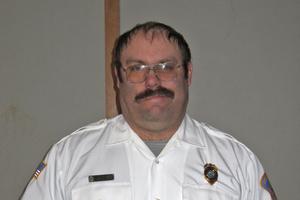 Lt. Scott Holden of the Brooklin Fire Department was honored as the department’s Firefighter of the Year this weekend at the annual town meeting. A 25-year veteran of the department, Holden was described as a dedicated and dependable firefighter who had become a true leader in the department. He was presented a plaque during a break in the town meeting on Saturday, April 6. 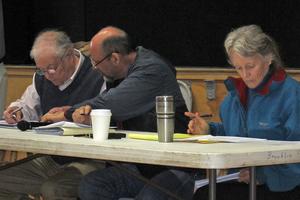 Members of the Brooklin Board of Selectmen, from left, Albie Smith, Mike Roy and Deborah Brewster check the figures in response to a question Saturday during the annual town meeting.