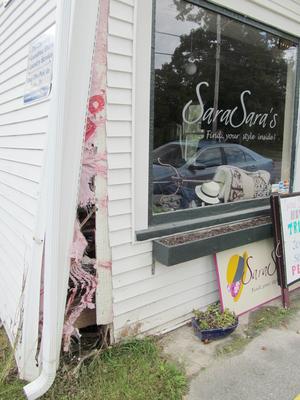 A car driven by Sally Fischel, 58, of Holden took out a telephone pole and knocked down a payphone attached to a concrete pad before coming to rest between the foundation and walls of SaraSara’s shop in downtown Blue Hill on Sunday evening, September 23.

Fischel’s car, a 2008 Subaru Outback wagon, is considered a total loss due to “extensive front end damage,” according to a press release from the Hancock County Sheriff’s Department.

Shop owner Sara Billings-Leighton, said she was awoken by a call around 10:45 p.m. to come and check out the building. She said she was told there had been some damage, but didn’t expect to see what she ultimately saw.

“I had to park at town hall,” said Billings-Leighton because the road was closed off while the telephone pole was being replaced. “It didn’t look so bad from across the road.” Those living in Blue Hill and beyond reported an approximate two-hour power outage while crews from Bangor Hydro made repairs.

Fischel was transported to Blue Hill Memorial Hospital with chest and neck pain and later released.

SaraSara’s will reopen temporarily at the former Leighton Gallery on Parker Point Road. The former gallery, which is now owned by Blue Hill Memorial Hospital, has been the subject of much debate in recent weeks with many community members concerned about its future. Billings-Leighton said she is glad to have the opportunity to set up in the space temporarily while she makes plans fer her next move.

Those wishing to find dry cleaning services can find the store in that location until further notice.

After meeting with the insurance adjustor and members of the Candage family (who own the property) later in the day on Monday, Billings-Leighton said it is unlikely the building can be repaired. 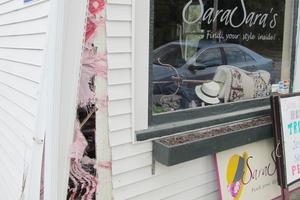 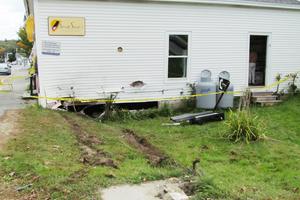 A 58-year-old woman from Holden drove from Main Street across the Parker Point Road, taking out a telephone pole and a payphone before the car she was driving landed between the walls and foundation of SaraSara’s shop in Blue Hill.