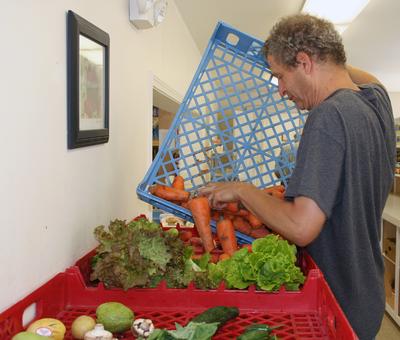 Rick Traub, volunteer food buyer for the Tree of Life food pantry, said that Horsepower Farm will be supplying fresh summer produce to the pantry, thanks to the Mainers Feeding Mainers program with Good Shepherd Food Bank. Here, Traub arranges produce on June 28 donated by a customer for distribution at the pantry.

Tree of Life will soon be receiving fresh, local produce on a regular basis, thanks to a new contract to supply summer crops to the pantry between the food pantry’s main supplier, Good Shepherd Food Bank, and Horsepower Farm in Penobscot.

In 2010, Good Shepherd put a new spin on the “buy local” initiative by forming wholesale purchasing partnerships with local food producers, in a program called Mainers Feeding Mainers, to get fresh, local food to families in need.

Tree of Life volunteer Rick Traub talked to “a few farms” in the area about participating and said Horsepower, which already donates vegetables to the pantry, “was very interested.”

“They do a lot anyway and this allows them to do more,” Traub said.

The real benefit goes to the customers of the food pantry, which has provided weekly boxes of food to Peninsula families in need since 1988.

“We’re moving more towards fresh foods and encouraging people to cook,” said Traub, who purchases food for the pantry on a volunteer basis. “It’s so much cheaper to offer fresh food.”

It costs the pantry the same to buy two pounds of potatoes and a pound of carrots as it does for one can of vegetables, Traub said.

The contract between Horsepower Farm and Good Shepherd allows the farm to plant acreage specifically to supply Tree of Life. The contract calls for $2,400 worth of vegetables, like tomatoes, zucchini, kale and Swiss chard.

These summer vegetables are in addition to the carrots and potatoes Horsepower Farm donates from its winter storage, Traub said, and will be paid for through grants received by Good Shepherd for the Mainers Feeding Mainers program.

Stretching food dollars is increasingly important for the Tree of Life, because the number of bellies it helps fill each week keeps rising. Traditionally, the numbers decrease in summer due to seasonal employment, Traub said, but this year, outside of “a little dip in May,” the numbers have remained steady at over 200 families weekly, which translates to 500 to 600 individuals.

“We’re way over what it was last year,” said Traub, who said nine new families signed up the first week of June. “That’s just ridiculous.”

Overall, there has been a 19 percent increase in individuals served for the first four months of 2012 over the same period in 2011. And while food costs for the pantry have increased a similar percentage, the cost per individual has actually gone down around 3.5 percent due to changes in the pantry’s buying pattern.

Children out of school and no longer receiving subsidized breakfasts and lunches may contribute to the rise in numbers, Traub said. Anecdotally, he has heard of children attending summer events that offer free hotdogs “and eating as much as they can. There’s a reason for that.”

Each family takes home between 25 and 30 pounds of food each week, Traub said, which equals to 2.5 to 3 tons per year of food leaving the Tree of Life shelves.

Of the $133,000 the Tree of Life made last year from its used clothing store, Turn-Style, all but $2,000 was spent on food, Traub said, literally “turning clothing into food.”

However, Traub said that the Tree of Life finances are in poor shape due to the increased need for food by local families.

“I think the public is more aware around Thanksgiving and Christmas holidays,” Traub said. “There’s an outpouring, but the rest of the year—the need doesn’t go away.”

Tree of Life spends around $3,000 weekly on food, and around $60,000 yearly on utilities and maintenance, including fixing or replacing broken equipment like freezers. A cast of some 25 volunteers runs the food pantry and TurnStyle, some of whom are also customers of the food pantry.

Direct monetary donations to Tree of Life can be earmarked for specific projects, like structural changes to the building, food or to help finish a film shot this spring on how the Tree of Life turns used clothing into food. The film needs $5,000 to finish production and distribution to the public and other food pantries as an informational tool. Traub added that a recent energy audit recommended $13,000 worth of improvements to make the building energy efficient.

“Money we don’t spend on fuel, we can spend on food,” said Traub.

Meanwhile, volunteers will be working to keep the pantry shelves stocked for next Thursday, when the doors open at 10 a.m. 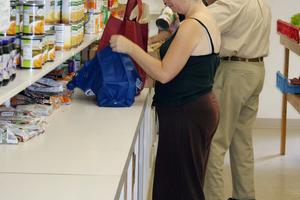 Tree of Life's coffers are “quite low,” said Rick Traub, food buyer for the food pantry, on June 28. Pictured is Sandy Daggett, of Sedgwick, one of the 500 to 600 individuals served by the Tree of Life food pantry each week. 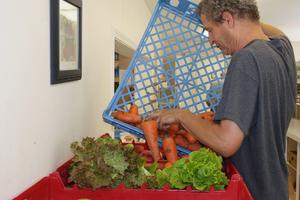 Rick Traub, volunteer food buyer for the Tree of Life food pantry, said that Horsepower Farm will be supplying fresh summer produce to the pantry, thanks to the Mainers Feeding Mainers program with Good Shepherd Food Bank. Here, Traub arranges produce on June 28 donated by a customer for distribution at the pantry.